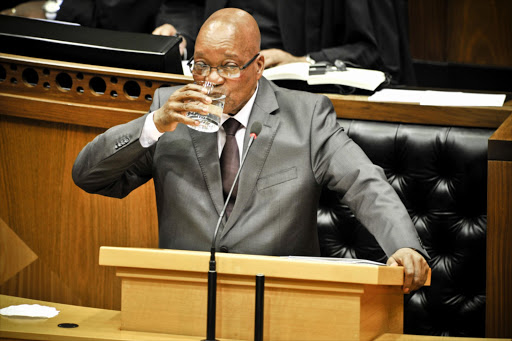 The African National Congress claims that it is appalled by the behaviour of the EFF, who disrupted the proceedings of parliament.

According to a Sapa report a scuffle broke out shortly after National Assembly Speaker Baleka Mbete adjourned the House following the Economic Freedom Fighters' refusal to leave after she ordered them out.

"The African National Congress is appalled by the behaviour of "Honourable" Members of Parliament who disrupted the proceedings,this afternoon, instead of engaging in robust debate as expected from representative members who must hold government accountable," the ANC said in a statement.

"It is quiet clear that the intentions of EFF is not to engage within the framework of promoting public accountability but have an intention of undermining not only the purpose of parliament but to promote anarchy and general disrespect.

"This conduct is consistent with people who are hell bent on undermining the rights of those who are duly elected members of parliament, representing their constituencies in parliament," the ANC said.

"The violent nature in which the EFF engages on issues is likely to take South Africa backward. We warn them not to take us back to the past where we will have no option but to defend our hard won democracy," the ANC said.

Before the whole protest broke out, the EFF asked President Jacob Zuma when he was going to pay back the money spent on Nkandla, as per the public protector's recommendations.

When the president appeared to evade the question, the EFF repeatedly demanded an answer.

House speaker Beleke Mbete warned the EFF to sit down, and eventually told them to vacate the building, threatening to have security remove them.

The EFF refused, and remained in parliament chanting "Pay back the money" as the house was emptied of all other MPs.

"We said to them that we’re not going anywhere. If parliament is suspended then we can sit there and leave when we want," EFF leader Julius Malema said according to the party's twitter account.

He also said "An anarchist in the form of the President says he can only listen to the Minister not the Public Protector in terms of Constitution."