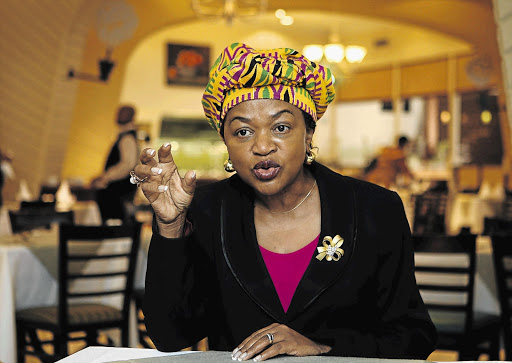 Five opposition parties have come together to submit a motion of no confidence in National Assembly Speaker Baleka Mbete.

The Congress of the People, Democratic Alliance, Economic Freedom Fighters, Freedom Front Plus, and United Democratic Movement are set to submit the motion on Thursday.

In a joint statement on Wednesday, tabled during a media briefing at Parliament, they called on African National Congress MPs to support the motion.

"Mbete has become an obstacle to constructive debate and executive oversight in Parliament," the parties said.

She could not, in good conscience, simultaneously hold the office of ANC chairwoman and Speaker.

The parties said Mbete's executive oversight had been compromised by some of her utterances, she had hired ANC loyalists to fill offices in Parliament, and her personal integrity "has been compromised on a number of occasions".

Mbete stood in the way of vigorous and open debate.

"The bottom line is, she is not an appropriate choice for Speaker.

"Her role in various scandals in the past, her on-the-record defence of state expenditure on President Jacob Zuma's private residence at Nkandla, her involvement in the ANC leadership, her appointment of a number of ANC politicians to key parliamentary positions, and her inability to maintain order in the House, all disqualify her from continuing in this position."

According to Parliament's rules, a simple majority (more than 50 percent) is needed for the motion to succeed. The ANC currently hold 62 percent of the seats in the House.

Responding to questions on the motion, Cope leader Mosiuoa Lekota said the issue was not whether it would succeed or not.

"[The essential issue is] members of the ruling party must be tested in the eyes of the nation. How many of them support this mismanagement that is going on in the House, and how many not?"

Most importantly, South Africans had to understand that the Speaker did not have to be a member of the ruling party.

"Because the Speaker ought to be a neutral person who protects the rights of every MP, and who's loyal to the implementation of the law as set out in the Constitution."

DA parliamentary leader Mmusi Maimane said opposition parties had thought it important that on matters of national importance, they should work together.

"The application of [Parliament's] rules is the most vital thing. And our challenge is this application cannot be biased. It cannot be seen at any point to favour one party or not.

"This raises our absolute concern on this matter, and therefore we cannot continue with a House [where] the implementation of these can be skewed."

EFF leader Julius Malema said the Speaker could be removed through a simple majority.

"If it happens we consolidate numbers tomorrow, and get some numbers in the ANC, or some ANC MPs don't turn up, we can shock them," he said jokingly.

"Her levels of seniority [in the ANC] compromises her objectivity on any matter, and therefore she prioritises the [ruling] party.

"Whether we lose this or not, we are going to put it on record," he said.

"[We need] a neutral traffic cop, just regulating the traffic and giving everybody a chance. That's the international example and I hope we can get there."

"The lines are blurred between the ANC and Parliament.... Baleka must go," he said.

Malema said there were "more capable people" within the ANC who were suitable to fill the role of Speaker.

"I mention those two... to show there are people of integrity [within the ANC] who still respect the House...," he said.