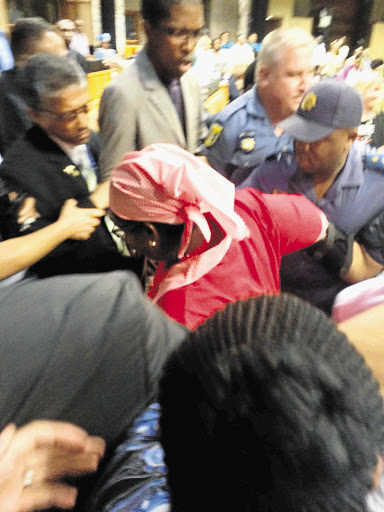 DISORDER IN THE HOUSE: DA MP Solly Malatsi took this cellphone picture of police manhandling EFF MP Reneiloe Mashabela after she refused to back down from calling President Jacob Zuma a thief

President Jacob Zuma's demand that ANC MPs use their numbers to crush opposition in parliament is at the centre of the chaos that erupted this week.

Zuma, in a scathing address, had told his party's members to stop being "accommodating".

Instead, he instructed, they should not allow "hooliganism" in the National Assembly that challenged the ANC's authority in a "most abrasive and shocking manner".

The call to defend the ANC came at a national executive committee (NEC) meeting in September - but was only made public recently. It seems to have had a direct influence on the brawls in parliament on Thursday.

Eyewitness accounts by several MPs and journalists of the unprecedented late-night invasion of parliament by riot police paint a shocking picture of total disregard for the law and constitution and an orchestrated attack on opposition officials by the police.

For the first time since apartheid prime minister Hendrik Verwoerd was assassinated in 1966, police officers entered the chamber during a sitting.

Six of the police officers were in full riot gear, armed with side arms and carrying pepper spray on their belts; five others were in normal uniform. Blood flowed as fights erupted between police and several opposition MPs. Among the MPs shoved and punched by police were women.

It appears that the police presence was carefully planned.

In the days leading up to the fight, the police presence at parliament was beefed up to levels not seen before, with about a dozen police vehicles descending on the square in front of the National Assembly at one point on Tuesday afternoon.

Parliament had taken the unusual step of putting members of the riot police on stand-by in anticipation of an opposition ruckus. They were allocated a committee room on the third floor of the National Assembly to use as a holding venue during sittings of the House.

Meanwhile, the television feed from the National Assembly was cut at the insistence of a highly placed parliamentary official who burst into the technical control room.

Earlier, chaos had reigned for more than 40 minutes as members of the DA, EFF and other opposition parties shouted "Leave! Leave!" and "You must go!" after Speaker Baleka Mbete ruled that the programme that all parties had agreed upon be changed without consultation.

Business Day's Paul Vecchiatto was the only journalist at the door outside the National Assembly when the police entered to remove Mashabela. Four members of the South African Police Service's public order policing unit, led by a Lieutenant-Colonel Lotz under the supervision of a Brigadier Petersen, entered the chamber.

The DA MPs, who had up until then been noisy but orderly, became involved once they realised the police had entered.

Shouting at the top of their lungs, the DA MPs ordered the police out of the House.

DA chief whip John Steenhuisen and his deputy, Mike Waters, were in front, screaming at the police in strong language. Other DA MPs, among them Dianne Kohler Barnard, accused them of fostering a police state.

Mashabela and three other EFF MPs at the podium started leaving and returning to their seats.

As Mashabela was walking to her seat, police officers started to manhandle her.

Lotz and four other riot unit members, dressed in black body armour, pushed Mashabela before them.

Lotz told her: "Listen, lady, this is not how we do things in South Africa."

Another riot policeman said: "Now you will learn."

In the process of pushing Mashabela, Lotz's shirt was torn.

The police action was wildly cheered by ANC MPs.

Robinson, in her 60s, was roughly shoved aside by the police.

DA MP Terri Stander was punched and shoved by police, falling hard on her neck and back after somersaulting over parliamentary benches.

In the corridor outside the House, parliamentary protection staff and ushers broke ranks to shout at the police.

"Aren't you big men, the way you treat women?" yelled one female usher.

It emerged this week that at the NEC meeting in September, Zuma instructed party MPs to use their majority to crush the opposition. This was soon after EFF leader Julius Malema led a protest inside the House that embarrassed the president.

" . . . The time has come for us to boldly use our majority to assert the right we were given to govern by our people," Zuma told the NEC.

"We cannot and should not be bulldozed by noisy smaller parties. We should guard our space and our position jealously and lead.

"The ANC commands more than 60% support in this country. We are stronger than many ruling parties in the world," Zuma said.

"At times we become reluctant to use our majority, and try to be as accommodating as possible."

Zuma's utterances led to the NEC issuing instructions to party MPs two months ago to "defend" Zuma and Deputy President Cyril Ramaphosa from the opposition.

Since then, National Assembly sittings have been characterised by chaos, with MPs trading insults and almost coming to blows, while others are booted out of the House by presiding officers.

Mbete and her deputy, Lechesa Tsenoli, have come out guns blazing against opposition MPs since the eruption.

Mbete said public order police had to be called as a last resort because opposition MPs were stubbornly defiant.

"All along we have resisted, in spite of us having a law that gives us the authority to call the police, like they're also called into a court of law to call anyone who is disruptive. We could not sit here in this institution and forever allow disruptions and outrageous conduct of honourable members who have come here not to work, but to ... push the boundaries [and] in the process rubbish this institution of the people," she said.

On Friday, ANC secretary-general Gwede Mantashe defended Zuma's orders, saying ANC MPs had to put an end to "hooliganism" in the House.

"What is wrong with that? Why should you give an institution to minority parties? All the time the ANC started by persuading people who instead kicked it in the teeth. He [Zuma] said you can't tolerate that forever.

"There is nothing wrong with that," Mantashe said.