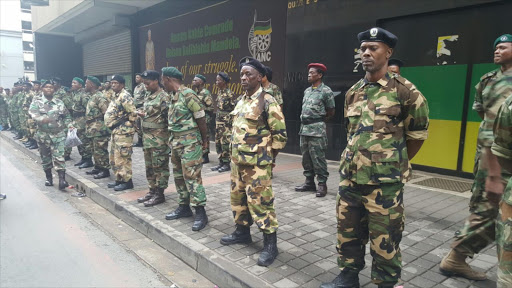 About 600 members of the Umkhonto we Sizwe Military Veterans Association (MKMVA) have gathered outside Luthuli House in downtown Johannesburg‚ ahead of a march by the DA against President Jacob Zuma.

Mabel Rweqana‚ from the MKMVA‚ said there were about 600 vets from all over the country.

“We are here to protect the headquarters of the African National Congress‚” she said.

“We are here to protect it from any harm that may arise.”

Rweqana said the MKMVA was there to protect the party from any intimidation.

“No one here has a gun. There is no need for violence today‚” she said.

Police and members of the Johannesburg Metro Police were managing traffic ahead of the DA’s planned march‚ which is due to start from the Westgate Transport Centre later on Friday morning‚ and proceed to Mary Fitzgerald Square in Newton.

A police nyala was stationed nearby‚ while ANC Youth League supporters started gathering in Beyers Naude Square around the corner from Luthuli House‚ the ANC’s headquarters.

One ANCYL supporter‚ who came from Bloemfontein‚ said: “I’m here for support. I’ll only be here until this afternoon. In fact‚ I’m going home later.”