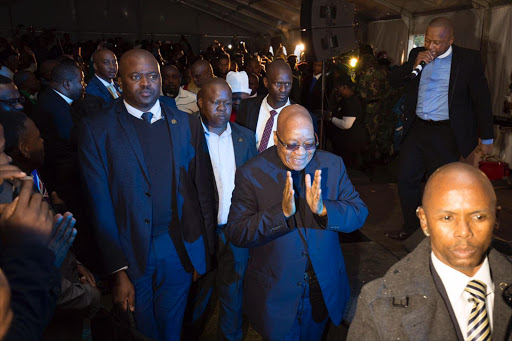 President Jacob Zuma speaks at a church service in Durban on Sunday night, where he slating the ANC's alliance partners.
Image: ROGAN WARD

President Jacob Zuma has launched a blistering attack on the South African Communist Party (SACP) and the Congress of South African Trade Unions (Cosatu) for meddling in the affairs of the ANC instead of resolving their own problems.

Zuma’s attack was in response to the strained relationship between the ANC and its Tripartite Alliance partners over his leadership and his recent controversial cabinet reshuffle.

Both Cosatu and the SACP have joined the chorus of calls for Zuma to step down. They have also publicly endorsed deputy president Cyril Ramaphosa to succeed him as ANC president in December. But Zuma has supported his ex-wife and former African Union chairperson Nkosazana Dlamini-Zuma to succeed him.

Speaking during a prayer meeting for peace and prosperity organised by the Abundant Life Church at People’s Park near the Moses Mabhida Stadium in Durban on Sunday evening‚ Zuma questioned why alliance leaders were discussing ANC issues and not their own.

“They have problems but they never talk about that. The ANC has never discussed any of the alliance partners. Then what makes the alliance talk? These are the questions we should be asking‚” said Zuma.

He said he would ask that question one day “but I’m not here for that. I’m here for prayer”.

“I think we’ve been quiet for too long because we’re behaving ourselves but I think the church leaders here have given us the lead to say enough is enough‚” said Zuma.

Zuma also questioned why he was being attacked ahead of the ANC’s elective conference in December when he was not going to stand for re-election.

“The questions that we need to ask ourselves is why‚ when we’re heading to the elective conference‚ the one who was president and who is not going to stand is fought against so much?” said Zuma.

He said he once told priests who were critical of him that they should pray for those who had done wrong.

“What I know is that the one who died for us said‚ ‘Forgive them Lord because they do not know what they are doing.’ So the priests should be saying I should be forgiven as I have sinned. But I am not told what’s wrong that I have done‚” said Zuma.