DA preparing for 'funeral of ANC' 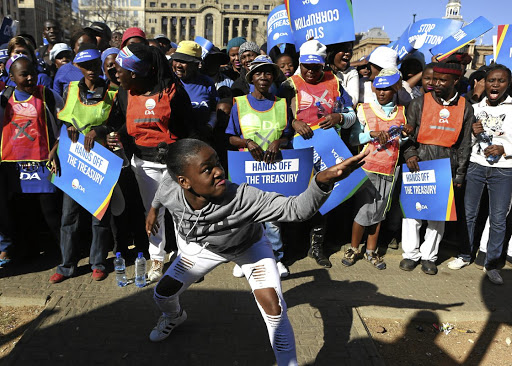 Opposition leader Mmusi Maimane is continuing to capitalise on the wave of scandals sweeping the ruling ANC, using every opportunity to bolster the DA's prospects in the 2019 general elections.

Maimane, who was introduced as the next president of South Africa to hundreds of DA supporters in Church Square, Pretoria, yesterday, said his party was preparing for the funeral of the ANC in 2019.

He led a march to the Treasury offices on the square to call for Finance Minister Malusi Gigaba to step down.

Maimane said it was time to intensify the fight: "After we take [President Jacob] Zuma out on August 8, we will carry on because 2019 is coming when we will see a new government that will take South Africa forward."

August 8 has been set for the vote of no confidence in Zuma. The Constitutional Court ruled that Speaker of Parliament Baleka Mbete had the prerogative to decide whether the voting should be secret or open.

"They [the ANC] must go because in 2019 there will be a coalition government that will take South Africa forward.we are not finished, we begin here at the Treasury, we will continue in the streets, in communities. On August 8.we vote against Jacob Zuma."

Maimane said Zuma had managed to plant "Father Christmas" Gigaba at the Treasury - the country's "ATM" - and the Guptas were licking their fingers because "Christmas had come early".

He said Gigaba must go with the rest of the ANC because South Africans wanted a finance minister who would ensure resources were used for the people.