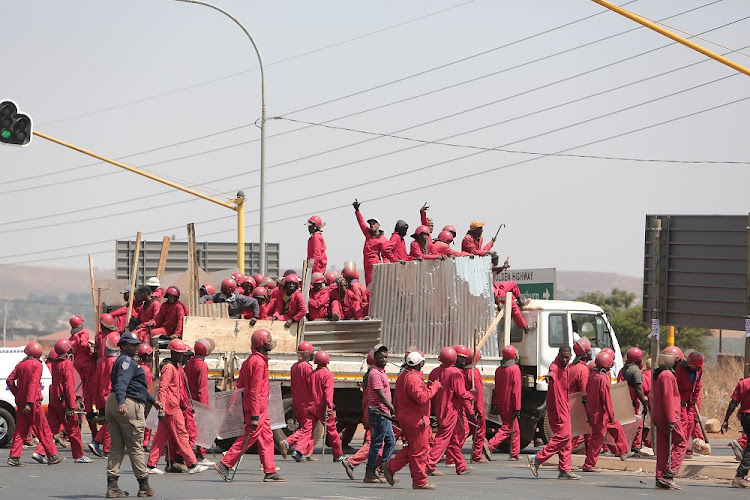 The Economic Freedom Fighters (EFF) are demanding that Johannesburg mayor Herman Mashaba explain how two people were killed during an eviction from council-owned land in Lenasia on Friday.

EFF Gauteng regional secretary-general Kgabo Hlonyana said the party staged a sit-in at council offices on Friday afternoon‚ after the news that two people had been killed in the eviction.

Two people were killed during an eviction carried out by Red Ants in Lenasia South on Friday. Occupiers claim the police were also involved.
News
4 years ago

Residents blamed the eviction company and the police for the deaths.

“Someone was shot dead and another was beaten to death‚ allegedly by the red ants‚” said police spokesperson Kay Makhubele.

The police are investigating two cases of murder and numerous assault cases‚ but “the charges might change to attempted murder because some people have been taken to the hospital”‚ Makhubele said.

But occupiers said the police shot at them.

“The police came in the morning and they started shooting together with the red ants. People died. They shoot at everyone they see and they are using live ammunition‚” said Sbo Ndlovu.

Makhubele said people “started occupying the land last week” and were resisting eviction. Ndlovu said they were not given eviction notices.

Hlonyana said Mashaba now had to go to Lenasia to address people and explain what happened.

“The problem that we have is that every time the city is dealing with black communities‚ they are hesitant to roll up their sleeves and go there‚” he said.

Hlonyana said residents had told the EFF that at least 30 other people were injured.

Minnaar confirmed that the city held an eviction operation. “The land was illegally occupied and the structures were demolished‚” he said.

He said the death of the two people was being investigated‚ but added that “the bodies were found in the veld”.

Mayoral spokesman Luyanda Mfeka said there are no plans for Mashaba to visit Lenasia as yet.