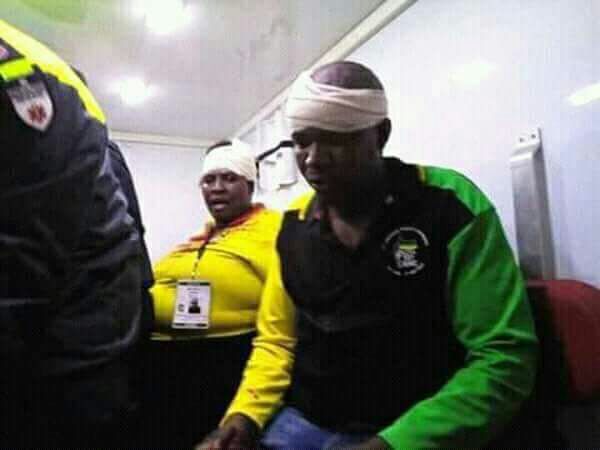 ANC delegates were injured when violence broke out at the provincial conference in East London on 1 October 2017.
Image: SUPPLIED

Police had to intervene when ANC members and delegates attending the Eastern Cape elective conference at East London ICC turned on each other, with fists and chair flying across the venue.

Supporters of Phumulo Masualle and Oscar Mabuyane exchanged blows inside the conference venue with the fight spilling outside as the former’s supporters fled for their lives.

Scores of delegates were injured and ambulances rushed into the ICC to attend to those that needed emergency services.

WATCH: This is how the violence started at the #ANCEConference in EL last night, resulting in some delegates leaving the venue. @ZineGeorge pic.twitter.com/UGE6sSdy0m

All these events unfolded in the wee hours of this morning and saw 755 delegates believed to be pro-Masualle fleeing the venue, leaving behind 951 who were predominantly rooting for Mabuyane.

“It’s unheard of in the ANC that such an incident would happen in the ANC conference. We have tried to abolish what’s called slates and factionalism, that is to an extent to which factionalism was so entrenched,” Kodwa said.

“We are a democratic organisation what we are beginning to see is people who are prepared to contest but they are not prepared to lose.”

After calm was restored inside with the 755 outside, the conference continued as credentials were adopted and they moved to nominations and voting without the likes of Masualle, who were nominated being not in the house.

The results of the new ANC PEC top five will be announced at 10am with Mabuyane expected to emerge new provincial chairman.

Lulama Ngcukayithobi is likely to be voted in the new provincial secretary.

ANC deputy president Cyril Ramaphosa is expected to address the closing address of the conference after announcement of results.