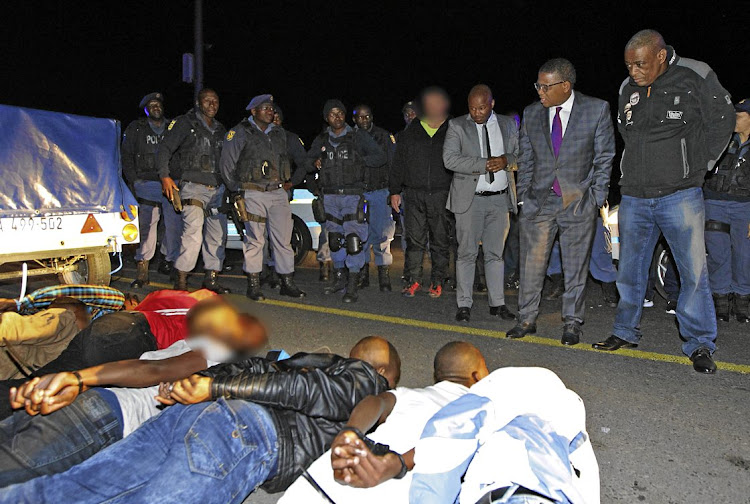 This image of Police Minister Fikile Mbalula was released in a media statement but was soon recalled after the arrested men were discovered to be members of a family transporting a deceased relative's body.
Image: SAPS Western Cape

Police Minister Fikile Mbalula could be heading for a bruising session with parliamentarians this week following the wrongful arrests of ten suspects who were allegedly held for hours only for him to boast about it on social media.

Legal experts who spoke to TimesLIVE say that “Razzmatazz”‚ as he is affectionately known‚ contravened the law and that his actions are punishable.

Member of the Police Portfolio Committee and member of the Democratic Alliance Dianne Kohler Barnard said Mbalula was out of order and should pay for violating the suspects' rights after police cable-tied their hands and forced them to lie face down for hours.

Some of the men who were allegedly wrongfully arrested in connection with the Marikana killings in Cape Town are shocked at still being regarded as ...
News
4 years ago

"I will be raising this with the committee and I just believe he should be sued in his personal capacity for that. What crime intelligence is there in stopping a group of people going to a funeral with a coffin?" she asked. “He is not a police officer and he is not a lawyer [so] for him to pre-determine guilt shows that he is just so out of his depth‚ he is clueless‚" said Barnard.

The minister bragged on Twitter last week that the police in Cape Town had nabbed suspects on the N1 highway who were allegedly involved in the gruesome shooting at the Marikana informal settlement in Philippi.

But it was later revealed that the 10 suspects were released without being charged. They were on the way to a family member’s funeral in the Eastern Cape.

Wits Law Professor James Grant said Mbalula was in the wrong for posting pictures of the suspects on social media before they appeared in court and therefore had contravened the South African constitution.

At the weekend the police crowed about breakthrough arrests into a bloody massacre in the Western Cape. Police minister Fikile Mbalula strutted at ...
News
4 years ago

"If it's true that the suspects were made to lie on the road for any extended period of time beyond which was necessary‚ then that would be a violation of the criminal procedure act. If they were made to wait for the minister to take a photo opportunity‚ then that was unlawful. Furthermore‚ one may not publicise the identity of the suspects before they have made their first appearance‚" said Grant.

Legal expert Ulrich Roux said Mbalula could be sued for defaming the suspects without verifying facts.

"If they do suffer any reputational or financial hardship or damages as a result of their photos being printed (published)‚ then they have civil recourse against them. They (suspects) would have to prove that as a result of the photo being published‚ they suffered financial loss and they could issue summons to the minister and sue him for that‚" said Roux.

Independent Police Investigative Directorate spokesperson Moses Dlamini said: "If the suspects want this matter to be dealt with‚ the should either sue the police or the ministry for mistaken identity."

Mbalula's spokesperson Vuyo Mhaga was adamant that his boss had done nothing wrong.

"It's by no way that it is an offence or any crime. He has not violated any act. Posting that picture is no offence‚ it's just a standard that the media uses within the police‚" said Mhaga.