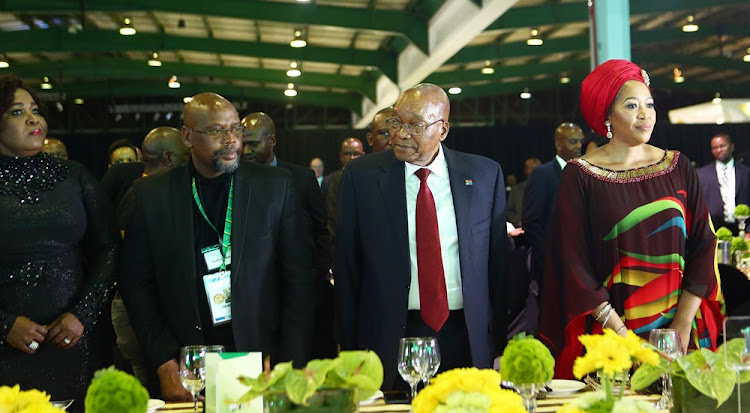 Outgoing ANC president Jacob Zuma did not eat‚ drink or dance at a glitzy “last supper” that was effectively called to bid him farewell after serving a decade as ANC party president.

The president arrived late as is his style – with his wives‚ Thobeka Madiba and Bongi Ngema‚ in tow – at the presidential gala dinner at Nasrec on Friday evening.

On his arrival‚ the two frontrunners in the battle to replace him as ANC president‚ Nkosazana Dlamini-Zuma and Cyril Ramaphosa‚ were already seated.

Zuma sat at the main table with Cosatu president Sdumo Dlamini to his right and first lady Thobeka to his left.

A regular at Zuma’s table at similar events‚ mining mogul Patrice Motsepe‚ sat further away from Zuma - barely conversing with the president.

Unlike his conduct at previous such occasions‚ Zuma did not offer any song or dance and occasionally posed for selfies.

His guests often had to plead with his security detail before they were allowed to tap the president on the shoulder and pull out their smartphones.

When starters were served‚ Zuma looked blankly ahead while his deputy‚ Cyril Ramaphosa‚ dug into the salmon starters and sipped on nothing but water.

For the main course‚ Zuma's guests were served a steak with roast potatoes, or beef fillet and steamed vegetables as the other option.

Ramaphosa was not as early as his political contender Nkosazana Dlamini-Zuma, who is generally known for her punctuality.

When Zuma went on stage to deliver his keynote address‚ he made special mention of Ramaphosa.

Four Khoisan men led by Chief Khoisan SA are threatening to camp outside Nasrec Expo Centre in Johannesburg until a member of the ANC Top 6 hears ...
Politics
4 years ago

In true Zuma style‚ he referred to Ramaphosa as the outgoing deputy president but slipped up by saying that he would be the incoming president.

The presidential hopeful reciprocated with gestures of gratitude.

When Zuma completed the speech‚ Ramaphosa walked up to Zuma‚ embraced him and then went on to greet first lady Thobeka Madiba-Zuma.

The president returned the favour by walking up to Ramaphosa's table‚ for a brief meet and greet with his wife‚ Dr Tshepo Ramaphosa.

But as Ramaphosa was about to make his way back to his seat‚ it appeared that he had just remembered that his boss was a polygamist and quickly turned to thank the other first lady present.

As the two passed by their seats‚ Zuma gave Ramaphosa a thumbs-up sign.

Gigaba calls for radical transformation of economy and inclusive growth

Finance Minister Malusi Gigaba fired the first shots at the ANC national conference on Saturday morning‚ calling for radical transformation of the ...
Politics
4 years ago

If one didn’t know better it would seem Zuma was giving Ramaphosa the nod to succeed him.

Out at the popular Vilakazi Street‚ where ANC delegates like to party‚ things were not as lively as the "comrades" were stuck at the Soweto campus of the University of Johannesburg where their registration dragged at a snail place late into Saturday morning.

But the chairperson of the ANC in KwaZulu-Natal‚ Sihle Zikalala‚ managed to find time to go sip some tea at one of the Vilakazi Street establishments in between the marathon last-minute lobby meetings.

And there was no action either at the trendy Cubana in Fourways in the north of Johannesburg‚ despite social media hype that ANC Youth League president Collen Maine would be hosting a party there.