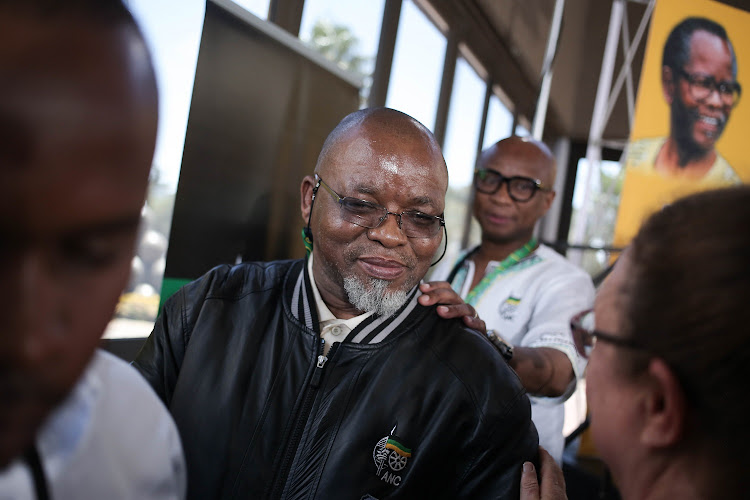 ANC secretary-general Gwede Mantashe and national spokesperson Zizi Kodwa leave a press conference at Nasrec, Johannesburg, where he announced that all delegates from nullified branches would not be allowed to vote at the ANC's 54th national elective conference.
Image: Alaister Russell

ANC secretary-general Gwede Mantashe has confirmed that delegates from KwaZulu-Natal‚ the Free State and North West affected by three court rulings on Friday would not be granted voting status at the party's national elective conference.

Mantashe addressed the media after an urgent special national executive committee (NEC) meeting took place at 8am on Saturday.

He said the NEC decided the provincial executive committees (PECs) of KwaZulu-Natal and the Free State would not be allowed to vote on any matter. Affected branches in Bojanala, North West, would suffer the same fate.

About 100 delegates are affected. The development is seen as a blow to presidential candidate Nkosazana Dlamini-Zuma’s support at the conference.

“We will not try anything that will contaminate the conference. They will not vote‚” Mantashe said.

He said the 27 members of the KwaZulu-Natal and Free State PECs and the affected delegates from Bojanala would participate as “observers and attendees”.

The outgoing secretary-general announced that the conference would start five hours later than scheduled - at 2pm.

Mantashe said a decision on whether to appeal against Friday's judgments would only be taken after the conference.

In the Pietermaritzburg High Court on Friday‚ Judge Rishi Seegobin dissolved the KwaZula-Natal PEC - preventing the 27-member executive from participating in the conference. Seegobin also granted the PEC leave to petition the Supreme Court of Appeal and the Constitutional Court.

The judge said the PEC would remain dissolved‚ as per a previous judgment‚ until the appeal was filed.

In the North West‚ ANC members won their court challenge to have the Bojanala regional conference nullified.

The group went to court asking for an order to set aside the 40 branch general meetings and to nullify the regional conference held on September 24.

On the same day‚ the Bloemfontein High Court ruled that the ANC Free State provincial conference held earlier this week was invalid.

Many pushing for generational mix in ANC national executive

Delegates to the ANC national conference are expected to push hard for a generational mix among those elected as members of the National Executive ...
Politics
4 years ago

Will policies adopted at ANC conference translate into action or just be more hot wind?

Delegates attending the hotly contested ANC national elective conference are expected to discuss a number of important policies that might have an ...
Politics
4 years ago

There are two main candidates who are gunning for the top position in the African National Congress.
Politics
4 years ago