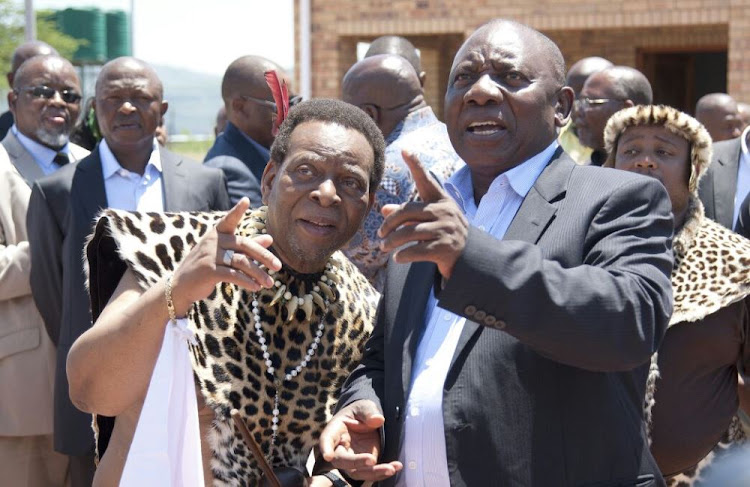 ANC president Cyril Ramaphosa and four members of the party's top six paid Zulu King Goodwill Zwelithini a courtesy visit at his Osuthu Palace in Nongoma in northern KwaZulu-Natal on Sunday as part of a campaign to renew and unite the ruling party.

The ANC leaders also briefed King Zwelithini on the outcome of the 54th national elective conference which was held in Nasrec in Johannesburg last month.

Magashule told the media that the purpose of the meeting was to introduce the new ANC leadership to the king but more importantly it was about the renewal and revival of the party.

The ANC was dogged by deep divisions ahead of its elective conference which saw Ramaphosa defeat Nkosazana Dlamini-Zuma.

Deputy President Cyril Ramaphosa, in his first major speech as ANC leader next weekend, is likely to flag a special prosecution process on state ...
News
3 years ago

"It's about the renewal and revival of the ANC as we celebrate 106 years‚" he said.

He said the ANC will be working towards uniting the party across the country.

Magashule said warring KwaZulu-Natal ANC leaders had also been invited to attend the meeting with the king as part of the attempts to unify the party.

Ramaphosa echoed Magashule‚ saying that they were pleased that the drive of renewing the ANC was being done under the king's auspices.

"Your Majesty we're going to work very hard to forge the unity that you want to see in the ANC and the majority of the people want to see‚" he said.

Ramaphosa also praised the king for his passion about working the land.

He said the ANC conference had resolved to expropriate land without compensation.

"We took a resolution that in the last 23 years we have not seen the progress we would have liked to see in terms of land distribution. We're now going to return the land to our people. We're going to expropriate land without compensation‚" he said.

However‚ Ramaphosa said this should be done without harming the country's economy‚ agricultural activities and threatening food security.

Like he did during his visit to the king before the conference‚ Ramaphosa also presented the Zulu monarch with three of his own African long-horned Watusi cattle from his farm as well as another cow.

During his last visit last year‚ he presented the king with one cow of the same breed. The king in turn gave him a shield made of Nguni cowhide.

The visit by the ANC’s top leadership to the province will also see them laying wreaths at the graves of founding party leaders John Langalibalele Dube‚ Josiah Gumede and Inkosi Albert Luthuli.

Magashule said they will also be visiting other traditional leaders in the Eastern Cape and across the country.

However he would not be drawn on the agenda of the ANC NEC meeting on Wednesday as calls for President Jacob Zuma to step down gain momentum.