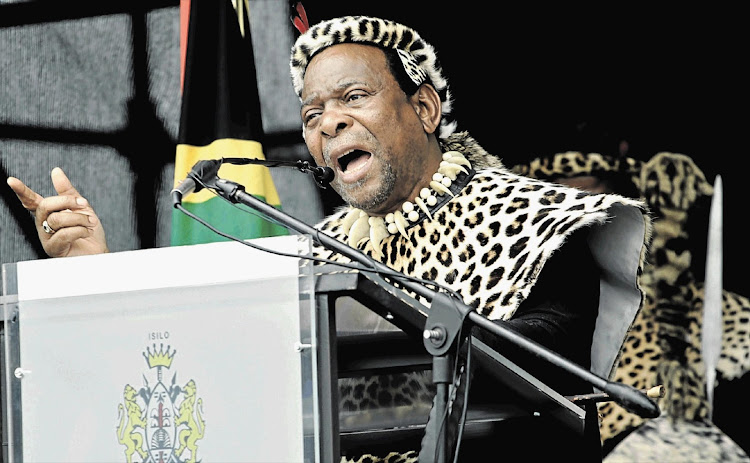 Leave the Ingonyama Trust alone. That's the message from Zulu monarch King Goodwill Zwelithini who is headed for what could be a bruising battle with the ANC over the sensitive issue of rural land custodianship.

During its national conference in Johannesburg in December‚ the ruling party resolved that traditional leaders should relinquish custodianship of the land held in trust by the government.

“That land belongs to the people and we have resolved that 13% of the land under the custodianship of traditional leaders be transferred to the people who live in those communities‚” said deputy minister of traditional affairs and member of the ANC’s subcommittee on legislature and governance Obed Bapela.

Zulu King to lead commemoration of Battle of Isandlawana

Zulu King Goodwill Zwelithini will on Saturday lead Zulu regiments to the Sphinx-shaped mountain of Isandlwana in Nquthu‚ northern KwaZulu-Natal‚ for ...
News
4 years ago

The ANC’s resolution followed the release in November‚ just before the party’s conference‚ of a report by the High Level Panel on the Assessment of Key Legislation and Fundamental Change.

The trust‚ which administers 2.8 million hectares of land on behalf of King Zwelithini‚ was established in 1994 to be the custodian of the land previously administered by the former KwaZulu-Natal government.

However‚ King Zwelithini would have none of it.

Delivering a speech during the commemoration of the Battle of Isandlwana in Nquthu‚ northern KwaZulu-Natal‚ on Saturday‚ King Zwelithini issued a strong warning against any attempts to dissolve the Ingonyama Trust.

“I want to send a message once again to those who think that they can do whatever they like about our soul‚ which is our land‚ that we should not be provoked. There is no need for Zulus to be abused for their inheritance‚” he said.

Zulu king calls for more men to get the snip

Zulu King Goodwill Zwelithini has called for more men in KwaZulu-Natal to be circumcised as part of efforts to fight the spread of HIV/Aids.
News
4 years ago

The Zulu monarch said land under the Ingonyama Trust “which we hear that we don’t deserve was not a gift but a fraction of what was taken from us”.

“This history makes us ask ourselves: what is the aim of the person who is brewing the war by saying that our land should be taken? As Zulus we’re asking ourselves why are we being hated‚” he said.

When President Jacob Zuma reopened land claims under the now repealed Restitution of Land Rights Amendment Ac of 2014‚ King Goodwill and other traditional leaders lodged a multi-million-rand land claim that could be South Africa’s largest to date.

The claim went outside the boundaries of KwaZulu-Natal to the Eastern Cape‚ Free State and part of Mpumalanga.

“These people accused us of destabilising [development] trusts by claiming our land‚” he was quoted as saying during a speech to celebrate the traditional circumcision of 200 young men in Kokstad in 2015.

“This is shocking‚ because this land was not taken from the trusts‚ which are now popular in the country‚ but was taken from traditional leaders‚ and your fathers and mothers who were murdered.”

Hundreds of amakhosi [traditional chiefs]‚ who live on land administered by the Ingonyama Trust‚ are expected to gather at the Durban International Convention Centre on Wednesday and Thursday to discuss their response to the panel’s report.

The meeting‚ which is endorsed by King Zwelithini‚ is expected to overwhelmingly reject the panel’s recommendations that the Ingonyama Trust be dissolved.