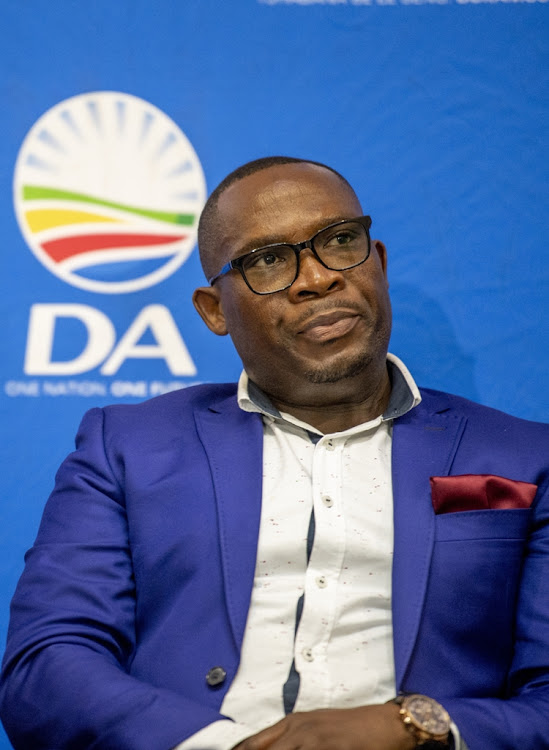 Western Cape DA leader Bonginkosi Madikizela says he feels vindicated after being cleared of wrongdoing when friends arranged a surprise birthday party for him which included a R3,000 cake.
Image: Gallo Images/Netwerk24/Jaco Marais

Mkhwebane investigated Madikizela after the ANC  laid a complaint against him for allegedly failing to declare gifts he received at his lavish surprise birthday party held at the upmarket One & Only hotel in Cape Town last year.

The party, which was reportedly organised by health MEC Nomafrench Mbombo, was attended by contractors doing business with the provincial human settlements department which is headed by Madikizela.

One contractor, who said she was a long-time friend of Madikizela, confirmed that she had paid for a R3,000 birthday cake for the bash.

The investigation into Western Cape DA leader Bonginkosi Madikizela has ground to a halt after the resignation of two people involved in the probe.
Politics
4 years ago

The leader of the ANC in the Western Cape provincial legislature, Khaya Magaxa, laid the complaint with Mkhwebane’s office, asking her to probe an alleged breach of the ethics code by Madikizela for failing to declare gifts received at the party.

A separate probe by the Western Cape provincial legislature’s ethics committee lost steam last year and has not reported on its findings.

In her report, Mkhwebane said it did not appear that Madikizela had solicited any gift "or that he received a gift that constituted an improper influence on him or attempts to do so".

Mkhwebane said the hosting and payment for Madikizela’s party by his friends and guests could not be regarded as a gift of benefit.

"He was not the only beneficiary thereof, as the hosting was shared by all those present. It also did not represent an item or object that became his sole property and that he could dispose of or return," added Mkhwebane.

Madikizela said Mkhwebane had gone through the matter with a "fine tooth comb" and he felt exonerated by the finding.

"I have been saying all along that I had no way of knowing. They have been chasing me, saying I have not declared. I mean, how do you declare a surprise birthday present, which in fact does not benefit you?" said Madikizela.

"I used to joke that what angers me is that I don’t even know how that cake tasted because I don’t like cake ... I am angry because I have been targeted for something that was not a direct benefit to me," Madikizela said.

He said the report had set a precedent on what could be declared when it came to rituals and celebrations, especially when it came to something like a cake, which would benefit everyone who attended such events.

Madikizela said the investigation by the provincial legislature was "nothing" compared to Mkhwebane’s investigation.

"I am waiting for that one as well, but it is difficult to see that one would come to a different conclusion," he added.