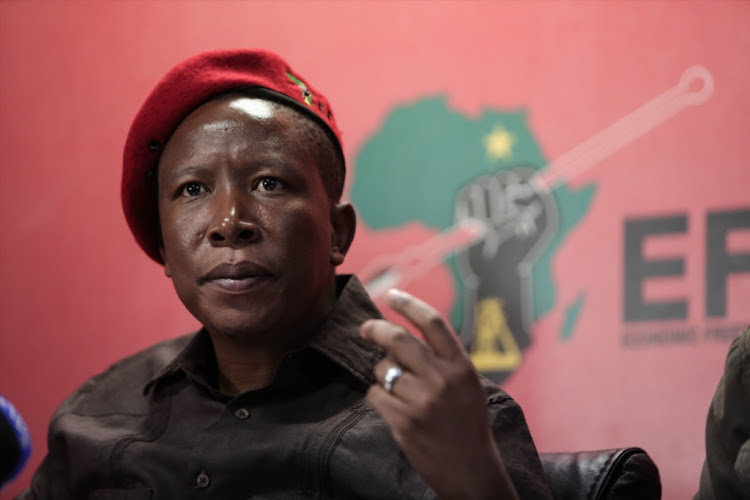 EFF leader Julius Malema has been taken to the Equality Court over hate speech and threats against journalists. Sanef says female journalists have been called 'whores', 'witches', 'bitches' and 'c***s', and calls have been made for them to be raped and attacked by staunch EFF supporters.
Image: Gallo Images / Sowetan / Alaister Russell

The South African National Editors’ Forum (Sanef) has lodged a complaint at the Equality Court against the EFF and its leader Julius Malema in a bid to halt threats and harassment directed at journalists.

"We did not take this decision to institute legal action against the EFF lightly. We believe in the South African way of resolving disputes around a table, but Sanef has been unsuccessful in seeking a meeting with Mr Malema and other EFF leaders about the remarks which we view as blatant hate speech," Sanef said in a statement on Wednesday.

Sanef wanted to meet the red berets in November but secretary-general Godrich Gardee said the party's schedule was "very tight and fully booked with prearranged meetings and activities up until the elections date".

This was despite the general elections being scheduled for May 2019 - six months away.

The decision not to meet Sanef came as a surprise as EFF spokesperson Mbuyiseni Ndlozi reportedly confirmed on radio and national television that the party was prepared to meet Sanef.

Malema had tweeted that he was prepared to meet on condition that Sanef did not bring what he described as a "racist white young boy called Adriaan Basson", said Sanef.

Basson is the treasurer of the forum and would have been a part of the delegation to meet the EFF.

Sanef said it had approached the court under the banner of defending media freedom and seeking protection of journalists against intimidation and threats against journalists by the party's leaders and supporters.

"Women journalists in particular have borne the brunt of an avalanche of insults levelled against them, particularly on social media.  The journalists who have reported critically on the EFF have been called 'whores', 'witches', 'bitches' and 'c***s', and calls have been made for them to be raped and attacked by staunch EFF supporters," said Sanef.

Sanef asked the court to interdict Malema and the EFF from:

The forum said that calls for the killing of certain journalists had been made by EFF supporters. "The EFF leadership’s silence on this barrage of hatred has been deafening," said Sanef.

While the complaint has been lodged, the forum said it was also demanding an apology from Malema.

"We are also asking for an apology from Mr Malema and the EFF to the individual journalists who have been targeted as well as to journalists in general, coupled with a recognition of the constitutionally protected role played by journalists in our society," said Sanef.

Zuma and Juju are besties again. What's going on?

SA’s political landscape is full of fake revolutionaries who merely pretend to care about poverty and disempowerment, DA leader Mmusi Maimane said on ...
Politics
3 years ago

The EFF want trespassing to be decriminalised – and the removal of alleged illegal land occupiers to first be sanctioned by the courts, not ...
Politics
3 years ago