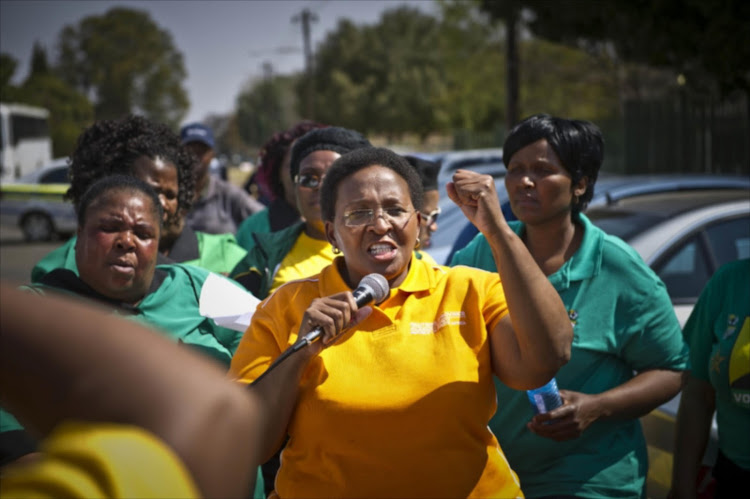 Sports MEC Faith Mazibuko addresses a rally in Fochville. The DA has asked the Electoral Commission of SA to investigate her for using taxpayers' money to get support for the ANC in the May 8 polls.
Image: Gallo Images / Foto24 / Nelius Rademan

The DA in Gauteng has asked the electoral commission to investigate sports MEC Faith Mazibuko for possible abuse of public money for party political purposes.

This after the emergence of an audio recording of Mazibuko telling staff they should roll out "combi courts" before the elections, in an apparent attempt to garner support for the governing ANC.

"Combi courts" are facilities that can accommodate a variety of sports.

The DA's premier candidate for Gauteng, Solly Msimanga, said, "It's disturbing that the MEC demands that her staff members deliver combi courts so that she can use them to win votes for the ANC. She further tells her staff members to flaut  rules in order to ensure the delivery of the combi courts that she promised to communities.

"This recording clearly shows that this department is failing to adhere to the supply chain management process and that there is no accountability and transparency in tender processes. The goal is to win votes at all costs," Msimanga said.

Gauteng’s sport, arts, culture and recreation MEC Faith Mazibuko has rubbished claims that she gave "unlawful instructions" to her staff during a ...
Politics
3 years ago

Msimanga said Mazibuko's conduct was "disturbing" and "shows the ANC's disregard for the people's money". The incident was a clear indication of how desperate the ANC in Gauteng was to win votes, he said.

"We will therefore refer this recording to the electoral commission for it to investigate the abuse of public money for party political purposes," Msimanga said.

He also condemned Mazibuko for the demeanor and language while addressing the employees.

"She is rude to her staff members and there is an element of racial and gender discrimination which goes against government's policies, such treatment of employees goes against the Employment Act," Msimanga added.

Mazibuko threatened her staff with dismissal if they failed to flout regulations and build the sports facilities.

The DA is pinning its hopes on winning Gauteng with the promise of creating a "golden opportunity province" with a thriving economy, a job in every ...
Politics
3 years ago

The ANC caucus in Tshwane on Thursday called on President Cyril Ramaphosa to sign off a Special Investigating Unit (SIU) proclamation and establish a ...
Politics
3 years ago