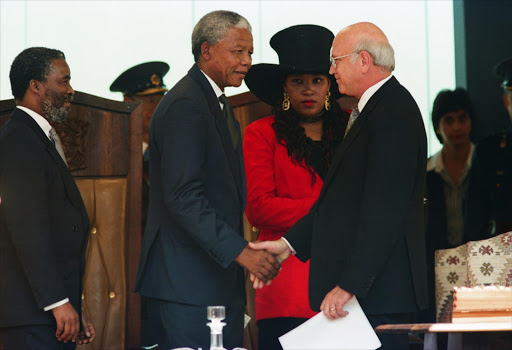 Nelson Mandela and FW de Klerk played a critical role in the political transition in South Africa in 1994.
Image: Reuters

On Sunday, public broadcaster SABC aired the 1994 pre-election debate between former presidents Nelson Mandela and F.W. de Klerk. The debate topped the Twitter trends list on Sunday, as it stirred reaction among the public.

The debate between the two leaders was not only the first, but it paved the way to what would soon be a new South Africa after the country's first democratic election.

Issues like crime, the effects of apartheid on black people, corruption, progressive engagement between leaders of opposing political parties and the general state of the country dominated the debate.

With the 2019 general elections looming, people said on Twitter they were looking forward to making informed decisions when they cast their votes on May 8. Some people remained divided on whether or not South Africa's progress since 1994 was enough.

it is sad that after 25 years, with over 40 parties there's no single party that is led by a women or have woman ace candidate. This is SAZAFRIKA #SABC1994DEBATE

#SABC1994Debate I'm so depressed after watching this debate I need to go & see a doctor now,the same ANC I voted for in 1994 is the one thts causing so much damage to the citizens of this country,really really depressed

And after more than 20 years how many people have actually been able to claim their better lives?? #SABC1994Debate

After all is said and done, the promises of #Pre1994Elections have not changed much, unemployment, education and many more are still rife. We engineered slogans to counter the energy we had. #SABC1994Debate

#SABC1994Debate We can say what we want, but the evil and demonic apartheid government took care of white people. What is sad today is that only the elite benefitted and is still benefitting in our democracy! Corruption is killing our people socially and economically.

The storm is really not over. reality vs dreams. One lesson which also crippled National Party was too much power which corrupted them. 25 years later we can repeat the saying too much power corrupt. #SABC1994Debate

Even today, I still do not understand why ANC and IFP were against each other when they were both supposed to be against NP.#SABC1994Debate

Just watched the #SABC1994Debate and nothing has changed. The many times I have heard "gvt of national unity" in this era, "commissions". 25 years later parties are singing from the same hymn sheet. The irony of it all. Nothing is really new under the sun

"When you vote you will make your choice. The choice will be, whether you want the same problems to continue into the next 5 years, massive unemployment, limited opportunities, continued racial divisions... - Nelson Mandela #SABC1994Debate

Intellectualism was the thing then,
Populism is the thing now,#SABC1994Debate

'No muffins, no sweets or money': Political parties promise to behave as they sign electoral code of conduct

The IEC on Wednesday held a ceremony for the signing of the electoral code of conduct in Midrand, where parties contesting the May 8 election were ...
Politics
2 years ago

My Monday was blue until I heard that President Cyril Ramaphosa got stuck on a train from Mabopane to Pretoria on one of his "pretend to be like ...
Politics
2 years ago