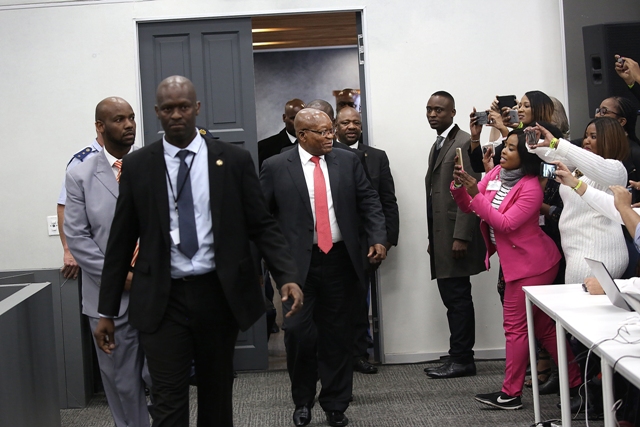 Jacob Zuma arriving to testify at the state capture inquiry on July 15 2019. Judge Raymond Zondo has denied the commission furnished the former president with questions he would be asked when he returns to the stand. File photo
Image: ALON SKUY

Deputy chief justice Raymond Zondo has denied the state capture commission furnished former president Jacob Zuma with a set of questions he would be asked when he returned to the stand, instead saying it was a document with “areas of interest” Zuma  needed to address.

Zondo, who chairs the commission, was referring to a recent report in Business Day which said the commission had submitted 80 questions to Zuma's legal representatives based on the allegations set out against him. The article, entitled “Zuma to get preview of nuke deal questions”, was published in Business Day on October 4.

Zondo was speaking at the inquiry ahead of Duduzane Zuma's second appearance at the commission on Tuesday.

"The article goes on to say the commission had sent Zuma’s lawyers 11 pages with 80 questions. When you read the whole article, it certainly gives the impression the commission has changed its decision on the question of whether Zuma should be furnished with questions before he appears before the commission. Since then, I think another newspaper has published the same article.

"The fact of the matter is the commission has not sent Zuma’s lawyers any questions. There is a document which has 11 pages and I saw that in the article there is a reference to 11 pages. That was sent by Advocate Paul Pretorius to counsel for Zuma. That document contains areas of interests in the various affidavits that had previously been given to Zuma as the affidavits from which questions would arise."

He said the document was sent to Zuma's counsel in respect of an agreement reached between both parties when Zuma appeared before the commission in July.

"He gave me the document again and I couldn’t see any questions. All I could see was an indication of areas of various affidavits in which the legal team was saying they were interested. I will cause that document to be released to the public so the public can see for itself there were no questions that were sent."

Former president Jacob Zuma's son and Gupta business associate Duduzane Zuma says he is not corrupt, but a victim of a 'political storm'
Politics
2 years ago

Former public protector Thuli Madonsela says former president Jacob Zuma’s son Duduzane is lying about her failure to give him an opportunity to ...
Politics
2 years ago