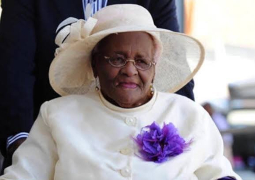 The ANC said in a statement her death came a few days before her 109th birthday.

“Mme Kotane was a comrade in her own right. She was one of the oldest stalwarts of our movement. She was the only remaining elder of the movement who was also the same age as the ANC.

“She will be remembered for her role in the defiance campaigns of the 1950s and the mobilisation towards the Congress of the People in 1955,” the ANC said in a statement.

Parliament's presiding officers said Kotane “comes from a selfless and brave generation of women who were at the forefront of bringing about a democratic, non-racial and free SA”.

“She was for many years a thorn in the side of the brutal apartheid system, and boldly confronted its rulers — including taking the battle to their doorstep during the historic 1956 Women’s March to the Union Buildings. It is fearless women like Mme Kotane who rejected the status quo and inspired generations of freedom fighters, who made the democracy we enjoy today possible.

“We continue to be inspired by the unwavering and bold resolve of Mme Kotane, and we will not rest until all forms of injustice, particularly against women and girl-children, are eliminated. We pledge to honour her contribution to our struggle for a better life for all by continuing to strengthen and deepen our democracy and all its instruments.”

Remains of 'nation-builders' to be returned to SA

For years Ma Kotane, the widow of struggle stalwart Moses Kotane, refused to push for his remains to be returned to South Africa. Her reluctance was ...
News
6 years ago

Former president Jacob Zuma has cast doubt on the genuineness of the ANC’s unity narrative and has questioned whether some party leaders meant what ...
Politics
3 years ago