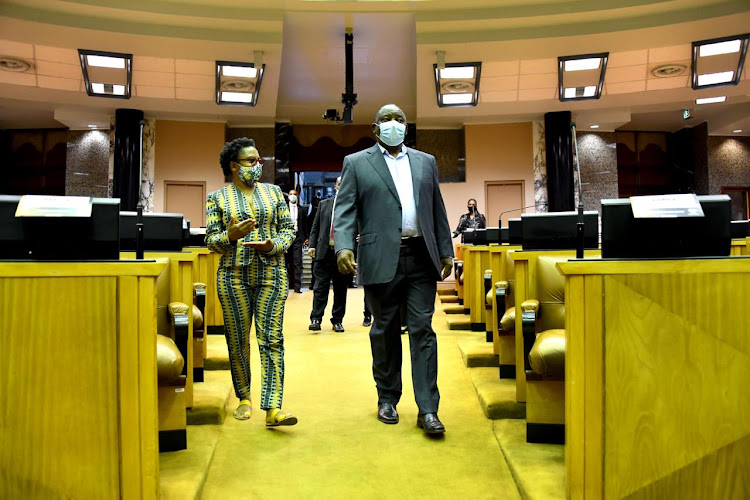 President Cyril Ramaphosa walks through the parliament chambers ahead of the state of the nation address on Thursday.
Image: GCIS

There was an eerie calm across the parliamentary precinct ahead of President Cyril Ramaphosa’s fifth state of the nation address on Thursday.

Unprecedented times have meant a Sona event with no red carpet, no pomp and ceremony and no high-level guests. Where there were usually politicians and their partners on the red carpet, there was none of the fanfare and pageantry this time about.

Only a few MPs were seen milling about, with the majority of the people in the precinct being journalists.

Security was tight, with several roads about parliament closed.

A staff member, who didn’t want to be named, proclaimed: “It’s the best Sona ever!”

When President Cyril Ramaphosa stood on the podium of the National Assembly to deliver his state of the nation address around this time last year, he ...
Politics
11 months ago

In a normal year, the staffer would have been running about and ushering guests to where they needed to be.

ANC chief whip Pemmy Majodina was one of the 14 ANC MPs who were present. She was her usual stylish self, but her outfit was more muted than in previous years.

Ramaphosa is expected to update the country on the Covid-19 vaccine rollout during his address. Critics have also called on the president to table a practical plan to revive an  economy laid low by the pandemic.

DA leader John Steenhuisen said Ramaphosa would have to show South Africans that he is in fact the man in charge, and not just another spectator to everything that is happening in SA.

“Three years into his presidency, he is yet to display this kind of decisive leadership. But such is the urgency of our situation that he is going to have to discover his fortitude by [this] evening,” he said.

The address is scheduled for 7pm.

President Cyril Ramaphosa's state of the nation address on Thursday will cost the country just over R100,000, saving millions of rand.
Politics
11 months ago

The Covid-19 pandemic has limited the normally drama-filled state of the nation address this year.
Politics
11 months ago