Business must take responsibility for its role in state capture, says Ramaphosa 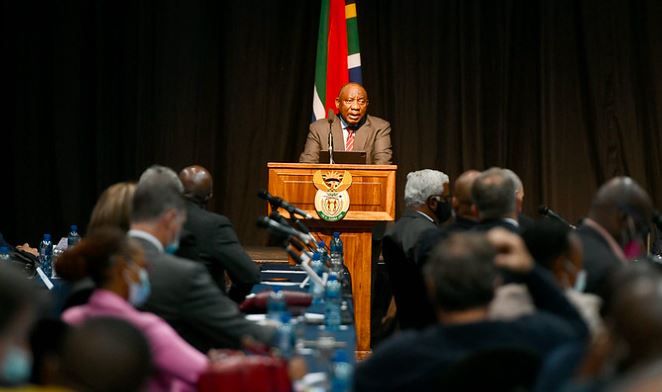 President Cyril Ramaphosa says some companies and individuals in the private sector were complicit in acts of corruption, overcharging and collusion.
Image: GovernmentZA/ Flickr

The business fraternity must admit some of their colleagues were complicit in state capture, President Cyril Ramaphosa said on Thursday evening.

“By far one of the greatest blows state capture did was to weaken our public institutions and state-owned enterprises. These were also weakened through private company interests,” he said.

The president was addressing the Black Business Council summit dinner at the Gallagher Convention Centre in Midrand, Gauteng.

He said: “Billions were looted through state-owned entities and the capacity of the state was steadily eroded, and in some cases even destroyed. In a number of cases some companies and individuals in the private sector were complicit in acts of corruption, overcharging and collusion. We must never lose sight of that.

“The era of capture was also associated with illicit financial outflows, tax evasion and other financial crimes. Some of our compatriots in business participated in all this as well.”

Ramaphosa said he would like organisations such as the Black Business Council to be vocal about such matters so “it should not be the Cyril Ramaphosas alone or people in government alone talking about this. If we are not vocal, some companies may want to do it over and over again.”

Rebuilding SA, he said, was a collective effort and responsibility.

Parliament announced on Wednesday that it expects President Cyril Ramaphosa to submit all outstanding reports of the state capture report, along with ...
Politics
1 month ago

“It also hurt the course of black economic empowerment and the advancement of black professionals.”

Some black professionals saw short-term interests and went with the flow.

Ramaphosa said the actions of those responsible must not further undermine black empowerment or hold back transformation.

“We must not allow a climate where empowerment is viewed with suspicion. Where it is harder for black businesses to raise finances or struggle to transact with government. We must resist and refuse the calls to abandon the transformative policies and defer the task of broad-based economic empowerment.”

More than ever “we need to tackle empowerment with greater intensity and in the face of those who use the new weapon”.

Ramaphosa said the new weapon is the use of “lawfare" or the courts of law.

“They are waging war against transformation and progress for black people.”

He said collectively, black people should sit down “rather than throw stones at one another”.

Black economic empowerment needs an environment in which companies can grow and thrive and find new markets, he said.

He called on business to work with government to transform the country where there are shortfalls.

LISTEN | Malema: Ramaphosa 'can go to hell' if he cannot be investigated

DA deputy chief whip Siviwe Gwarube said this is an important step for transparency and accountability.
Politics
1 month ago

It should also clean its house, then call out corrupt ‘leaders’ to make church-goers aware of the damage they cause
Opinion & Analysis
1 month ago

The joint committee on ethics and members’ interests has been requested to investigate possible contraventions, but this will only apply to members ...
Politics
1 month ago