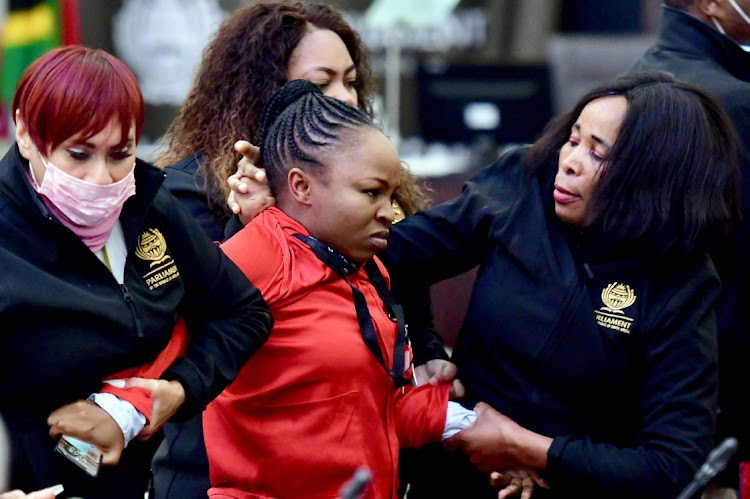 EFF MP Naledi Chirwa says it is disingenuous for National Assembly speaker Nosiviwe Mapisa-Nqakula to say she is disturbed by allegations of gender-based violence (GBV) during a scuffle in parliament last week.

EFF MPs were removed after delaying President Cyril Ramaphosa's budget vote on Thursday and Friday by disrupting proceedings and raising points of order. Parliament said in a statement on Monday Mapisa-Nqakula was disturbed by allegations of GBV during the altercation, and promised to institute a swift investigation into them.

Chirwa hit back, saying Mapisa-Nqakula ordered their forceful removal and should not act shocked.

“It happened right in front of her eyes at her command. She was alerted numerous times. She responded by sending more men to handle women MPs. Shocked my foot!,” she alleged.

It happened right in front of her eyes at her command. She was alerted numerous times. She responded by sending more men to handle women MPs. Shocked my foot! https://t.co/wRowHacAR6

Parliament responded: “The speaker is highly disturbed by these allegations and wishes to place it on the record that no stone will be left unturned in establishing all the factual circumstances around them. Gender-based violence, whether committed against female MPs or female members of staff, must be condemned in the strongest terms.

“Our society is suffering the trauma of violence perpetrated by men against women, and this continues to represent a direct attack on the fundamental values of our democracy and the constitution. Parliament must lead society in this battle and, therefore, will never tolerate such acts, particularly within its precincts.”

The EFF said last week it had opened a case of assault with intent to cause grievous bodily harm and sexual assault against Mapisa-Nqakula and the PPS. The party vowed to pursue private prosecutions against the speaker and the PPS if the cases don't yield any results.

Disruption of President Cyril Ramaphosa’s reply to debate on the presidency budget vote continued in parliament on Friday.
Politics
3 weeks ago

'You are sleeping on the job': EFF to public works minister De Lille

Opposition parties have criticised public works and infrastructure minister Patricia de Lille, saying she was failing in her job and that while her ...
Politics
1 month ago

Chairperson of the Walter Sisulu University council Tembeka Ngcukaitobi on Wednesday said the accreditation debacle at the institution is ‘not as big ...
Politics
1 month ago