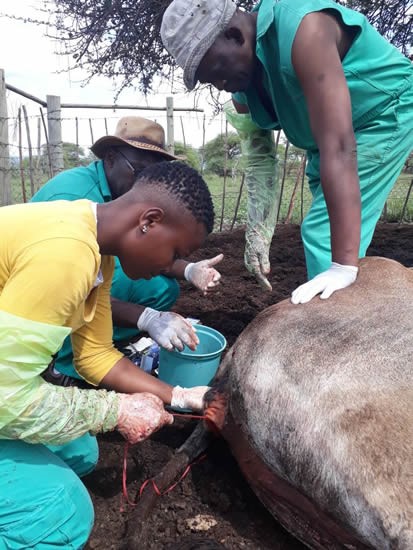 Like humans and all other living beings, animals also have a need when it comes to their healthcare needs. This is why the North West Department of Rural, Environment and Agricultural Development is increasing efforts to strengthen veterinary services in the province.

The department has already placed veterinarians in rural areas on the province as part of their one-year compulsory community service to ensure that all threats to animal health and food safety are detected and dealt with as early as possible. The department said the objectives of the Veterinary Compulsory Community Services programme (CCS) is to provide accessible and affordable veterinary services to under-served and poor-resourced areas in the country.

The newly-deployed veterinarians have been sent to veterinary offices in local municipalities including Kagisano, Taung, Ramotshere Moiloa Madibeng, and areas around Potchefstroom centres.

Dr Mukani Nobela who is one of the veterinarians said it is important to keep animals healthy. “Animals are living, breathing beings just like human beings. They feel pain and get sick but most importantly, some protect us and others feed us, so we need to take care of them,” the 27-year-old said.

Nobela works in a veterinary office in the Madibeng Local Municipality but from time to time is called to go provide her specialised services in different households across Madibeng. Part of her daily job is to vaccinate dogs and cats and treat livestock for different diseases including Transmissible Venereal Tumor.

The University of Pretoria graduate said she chose her career path because while she was growing up in Giyani, Limpopo, she did not see anyone taking care of animal health in her community. She sees working in the North West as an opportunity to motivate community members to care for their animals, as it is a rural province, and also hopes to inspire black females in the area to follow in her footsteps.

“The North West was my first option mainly because there is a lot of animal production taking place here and it is close to my home province,” Nobela said.

She also hopes to increase her skills and knowledge with regard to field work for domestic or companion animals and those used in agriculture. The department said CCS veterinarians are expected to make use of the already existing communication channels with the community in order to establish mobile community veterinary clinics.

How to choose a career for your personality!

The Chinese philosopher, Confucius, once said ‘Choose a job you love and you will never have to work a day in your life”.
Features
3 years ago

Do you have problems learning math? Here's a free app for that

The future looks bright for a Pietermaritzburg student who has developed a web-based and mobile phone app to make maths education freely accessible ...
Features
3 years ago