From cab driver to bespoke designer dressing the rich and famous 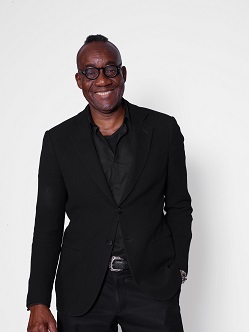 Eboka Design is welcoming spring with a collection bursting with wild colours and fierce florals. At the centre of the grand manor that houses the design emporium’s collection is Poppy Ntshongwana, the model chosen for the brand’s foray onto the web. Standing at the foot of the infinity curve that dominates the House of Eboka is the brand’s stern creative director and founder, Fred Eboka.

He describes Eboka Design as luxury meets contemporary African design. For more than 25 years, it has created what he describes as “bespoke, one of a kind” garments including gowns and other women’s couture designs, bridal wear and menswear.

The designer hails from a household filled with women in Lagos, Nigeria. His love for fashion was born when he advised his sisters on their style choices, it developed through his art paintings and it blossomed into a career that has seen him dress icons such as Miriam Makeba, Graca Machel, Adelaide Tambo, and the current first lady, Tshepo Ramaposa.

Before becoming a must-watch designer, Eboka was up against many challenges to make his design dreams come true. He left the comforts of home in Nigeria and moved to the US, where he studied fashion and textile at Philadelphia University and then went to Temple University where he did his second degree in visual communication at the Tyler School of Art. To help fund his studies, he worked as a taxi driver.

While studying in the US, as a black man on campus he was often snubbed –memorably, once, by a fellow student he picked up in his cab.

“She was a backseat driver and rude and when I called her on it she dismissed me, telling me to shut up, as I was ‘just a cab driver’. I told her that actually I was doing my second degree on the same campus. Would you believe it, she actually spat in my face! I was shocked!”

But this was nothing new for an African studying visual design in the 1980s. Eboka took part in the campus’s design competition, where shows were adjudicated anonymously. He shocked the judges when he was announced as the winner. His victory was marred when he didn't get a job that was promised to the winner.

Eboka now runs his business side by side with his daughter, Tinuke Eboka, who takes care of the brand’s online presence and marketing. “The fashion industry now leans heavily on the digital world, I don’t know that side of things but she does,” he laughs, sharing his inability even to navigate his personal social media accounts.

Having recently launched a new website and refreshed social media platforms, Eboka explains that it was important to ensure his brand was accessible to potential customers online, avoiding a mistake often made by new brands trying to make it in the fashion industry.

“Fashion is ever evolving, but style remains a constant. And making women look and feel their best is the ultimate goal that is enormously satisfying.”

Earlier this year, Complex magazine noted that sneaker culture had changed considerably. Having grown from an exciting sub-culture into a mundane ...
Features
3 years ago

After struggling to convince his wife to experience nature first hand by spending the night in the bush, he thought of an innovative way of making ...
Features
3 years ago

Yolisa Fuma builds international business one bead at a time

Yolisa Fuma has walked a remarkable road from living in poverty in the Eastern Cape, to discovering a passion for arts and crafts and now running her ...
Features
3 years ago