Grand Slam of seconds for Louis as Thomas wins PGA 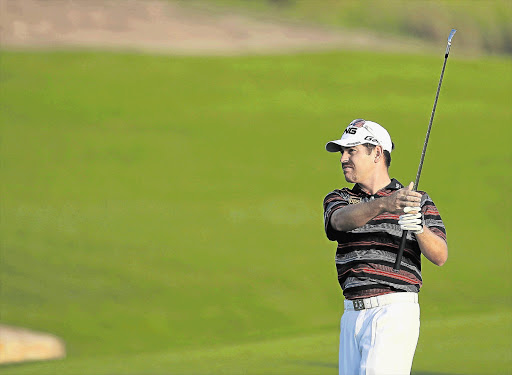 Louis Oosthuizen completed an unwanted career Grand Slam at the US PGA Championship at the Quail Hollow Club on Sunday – second at each of golf’s four majors.

Oosthuizen ended the season’s fourth major in a tie for second at six-under‚ two strokes behind winner Justin Thomas‚ 24‚ who became the eighth first time winner in the last nine majors.

After play-off losses at the 2015 Open and the 2012 Masters‚ as well as second at the 2015 US Open‚ Oosthuizen again proved he enjoys the big stage but was unable to find a way to get over the line despite a one-under round of 70.

One birdie and a bogey on the front nine kept the 34-year-old in the hunt as the leaderboard moved constantly with various players going on birdie runs.

Oosthuizen bogeyed the 11th and seemed to be slipping out of the picture as Italy’s Francesco Molinari and Americans Patrick Reed and Ricky Fowler made charges.

Molinari and Reed both moved to seven under at one stage and Fowler‚ playing well ahead of the leaders‚ had a string of four consecutive birdies in the back nine to move to five-under.

An eagle on the par-five 15th vaulted Oosthuizen back into the frame‚ but he followed that with a bogey on 16. A birdie on 18 left him needing Thomas‚ playing one group behind‚ to falter.

The American was too good to do that.

“I didn't really make any putts the whole round‚” Oosthuizen said.

“The only putt I made was on the last hole. Two loose shots on 10 and 11 probably cost me one‚ maybe two strokes.

“I gave it everything I had coming in. I left myself with an impossible first putt on 16 and could have done better than that‚ but three-putted.

“It was difficult hitting it close on [the par three] 17 and trying to make birdie. I hit one good putt‚ on 18.”

Oosthuizen played solid golf all week and was one of only three players in the top 10‚ along with Thomas and Japan’s Hideki Matsuyama‚ not to record a double bogey or worse in the treacherous conditions.

Third round leader Kevin Kisner dropped to four-under after returning a three-over 74 and Matsuyama could only manage a 72‚ as his quest to become Japan’s first male major winner was put on hold.

Thomas‚ a contemporary and good friend of last month’s Open winner Jordan Spieth‚ fired a final round three-under 68 to earn his place in golfing history as a major winner. His victory also underlined how deep the fields are in modern golf‚ and how unlikely it is that we will Tiger Woods-type domination of the sport again.

The aggressive Thomas also enjoyed some good fortune along the way.

On the par-five 10th‚ his drive was headed into the deep left rough‚ but struck a tree and landed in the middle of the fairway.

On the green he had nine feet for birdie and he appeared to hit a great putt‚ but the ball stopped on the left lip of the cup and stayed there for what seemed an eternity – in reality nine seconds – before dropping.

"It was funny because it snuck up on the hole‚” Thomas said.

“We read it going left and then a bit right and it never came back right.

"Once it got there I felt it would go in but it didn't so I acted like a child and had a tantrum. Suddenly it went in and I didn't look so dumb."

Thomas chipped in for birdie on the 13th and made another birdie at the 17th to head up 18 in a strong position. All he had to do on the difficult final hole was stay out of trouble to put pressure on Kisner behind.

A par left Kisner needing an eagle to force a play-off‚ but he double-bogeyed after finding water and the Wanamaker Trophy went to the Thomas.