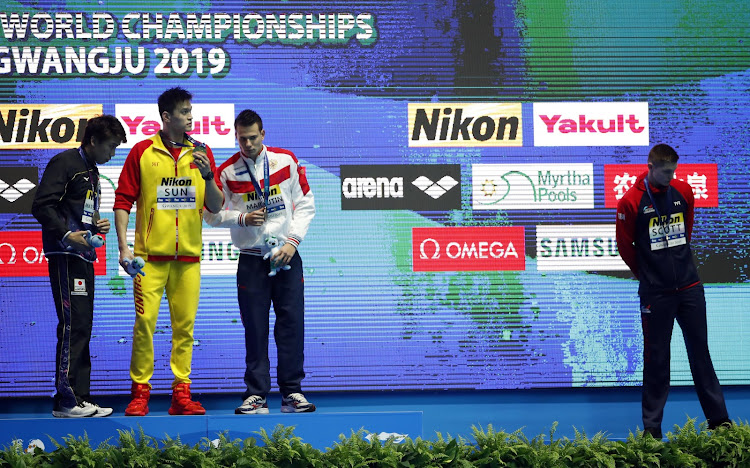 Gold medallist Sun Yang of China reacts as Duncan Scott of Britain refuses to stand on the podium after the men's 200m freestyle race at the World Swimming Championships in Gwangju, South Korea, on July 23 2019.
Image: REUTERS/Stefan Wermuth

Whether British swimmer Duncan Scott is a sore loser or is standing up for clean sport is a question many are asking after a video of him refusing to share a podium with China's Sun Yang went viral.

CNN, The Today Show and Chinese state media CGTN are reporting that Scott refused to shake Yang's hand, share a podium with him and pose for pictures. This after Yang won the 200m freestyle final at the world swimming championships in Korea on Tuesday.

In the video Yang is seen shouting and gesturing towards Scott.

British swimmer Duncan Scott has staged his own podium protest against Chinese champion Sun Yang, refusing to stand next to him over doping allegations. #9Today pic.twitter.com/NNWpzjzdrx

In 2014, Yang was labelled a cheat after he tested positive for a banned substance.

Scott's demonstration followed that of Australian swimmer Mack Horton who also refused to share a podium with Yang on Sunday. Reacting angrily to Scott's refusal to stand on the podium, Yang told Scott, "You're a loser, I'm a winner."

Look at the glitter and you’ll see that SA cracked an African relay record at the world championships in Gwangju on Wednesday morning.
Sport
2 years ago

Chad Le Clos is ready to fight to win SA’s first medal of the world swimming championships in Gwangju on Wednesday night after Tatjana Schoenmaker ...
Sport
2 years ago