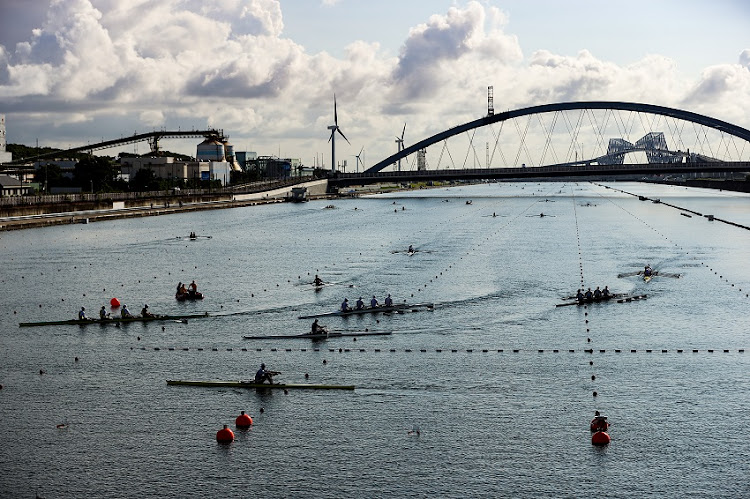 A general view of athletes training prior to competition on day one of the Tokyo 2020 Olympic Games at Sea Forest Waterway on July 24, 2021 in Tokyo, Japan.
Image: Cameron Spencer/Getty Images

Sport stretched out over Tokyo on Saturday and gold medals rained down as the Olympic Games burst into life, finally casting aside some of the shadow of COVID-19 and controversy that has plagued the global showpiece.

China made an instant statement of intent when Yang Qian grabbed the Games’ first gold, and Japanese judoka Naohisa Takato lifted home hearts with gold on the mat a day after the nation’s global  superstar, tennis player Naomi Osaka, had lit the cauldron to officially open the pandemic-delayed Olympics.

But fans, banned from all venues under COVID-19 protocols, were served an early reminder of the pandemic’s potential impact as two US archers said they were competing unvaccinated through personal choice, and organisers said another athlete had tested positive for the virus.

The choice of Osaka to light the cauldron on Friday had capped an opening ceremony shorn of glitz and staged in an eerily silent stadium.

But while the ceremony had been like none before, day one of sport offered a much more familiar feel despite the absence of spectators, as the world’s elite athletes ran, rode, fought and swam as a hankered-for business-as-usual vibe built.

The sight of an athlete, eyes glistening with joy, was always going to be a welcome one for organisers, and 21-year-old Chinese shooter Yang  provided it first, holding her nerve in the women’s 10-metre rifle competition to overhaul Anastasiia Galashina.

The Russian crumpled under pressure on her final shot, shooting 8.9, by far her worst of the day, and the worst score any of the finalists registered. “I got too nervous, held on too long,” she said.

Yang was thrilled, and hinted at her prime motivation. “It’s the 100th birthday of the Chinese Communist Party,” she said. “I’m so happy that this golden medal is a gift to my country.” Organisers are hoping sport can distract from the stream of embarrassing gaffes and coronavirus woes which have marked the event, postponed by a year.

But there was no ignoring the global pandemic, as organisers said one more athlete had tested COVID-positive, bringing the total number of disclosed virus cases to 123.

Later, American archers Brady Ellison and Mackenzie Brown said they were free to choose whether or not they got vaccinated against COVID-19 , after a US Olympic swimming gold medal prospect who had declined the vaccine was widely criticised on social media.

“It’s one hundred% a personal choice, and anyone that says otherwise is taking away people’s freedoms,” Ellison, the world’s No.1, said on the competition sidelines.

TYPHOON PREPARATION Organisers are also preparing for a typhoon, having already reworked Monday’s rowing competitions to integrate them in the schedule for Saturday and Sunday.

But while the rowers look anxiously to the skies, surfers — who start their competitions on Sunday — should benefit from bigger swells.

The 3x3 basketball tournament made its debut and US First Lady Jill Biden  and French President Emmanuel Macron led the cheering as the American women beat France.

At 12, Syria’s Hend Zaza was the youngest athlete competing in Tokyo but her table tennis tournament was over in a flash as she lost to Austria’s Liu Jia, before taking a selfie  with her conqueror.

Liu, who has a 10-year-old daughter, had struggled to sleep on the eve of the event. “Yesterday I asked my daughter, ‘Do you know your mother is playing against someone two years older than you?’ Her first response was, ‘Then you better not lose!’“ Perhaps Japan’s “King Kohei” Uchimura could have done with similar advice, but the reign of the Olympic all-around champion and holder of seven Olympic medals, came to an abrupt end when he failed to qualify for the apparatus final, closing his storied Olympic career.

“I couldn’t perform what I have practised. That’s how I simply think,” he said.