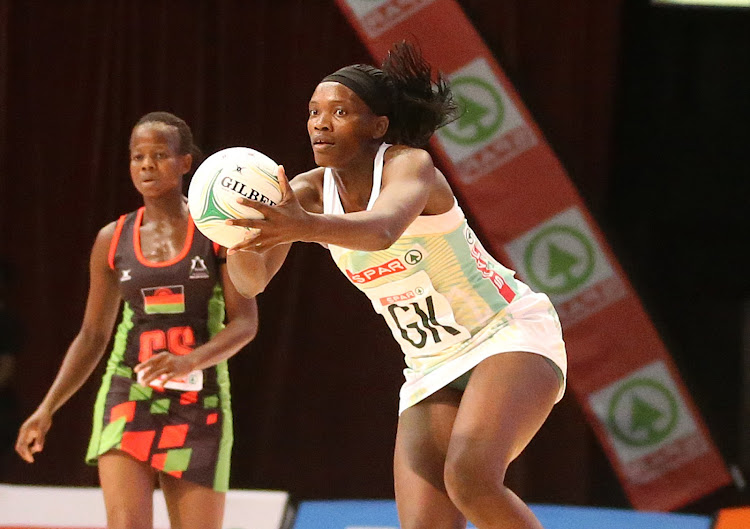 Phumza Maweni in action for the Proteas against Malawi during the Spar Netball Challenge in Sun City.
Image: Reg Caldecott

Proteas Netball goalkeeper and defender Phumza Maweni wants to see more young players moving overseas to test themselves against some of the best players in the world at an early stage.

Speaking during the Spar Women’s Netball National Championships that started in Cape Town this week, Maweni said playing league netball at the highest level has improved her game dramatically over the years.

“When most of the players get opportunities to play in top leagues overseas (England, New Zealand and Australia) it helps those players and also strengthens the national team,” she said.

“It is important for players, especially from a young age, to get more time on court against some of the best in the world because that also brings confidence.

“When they come up against them in national colours it won’t be too challenging because they would have played with or against them in the league during the season and have a  better understanding of how to deal with them.

“The other important thing is that when we come to the national team from Europe or New Zealand and Australia, we bring valuable experience and share it with some of the inexperienced members of the Proteas.”

Maweni said the lessons she and other players have learned playing overseas are going to help the Proteas in the coming two years where they have the Commonwealth Games and the 2023 World Cup.

“Over the past few years, I have learned a lot from playing in Australia. It was not only on court but off court as well due to different cultures. I also had to acclimatise to a different style of play because they play differently to what I was used to.

Maweni went said the move to England with Team Bath was a surprise as she had planned to return home at the end of her time with Sunshine Coast Lightning in Australia.

“It’s super exciting. I didn’t expect it because I had told myself that from Australia I was moving back home because I didn’t want to continue playing in international leagues.

“It is a great opportunity and I am really grateful because we have big games next year in terms of preparing for the 2022 Commonwealth Games and the 2023 World Cup.

“Playing in England will help me to stay fit and competitive and I am grateful for the opportunity. It is a big move for me and I have to adapt to new conditions and new surroundings.

“I  have to make sure  I protect myself to avoid injuries and do the right things during training sessions and  matches and make meaningful contributions to the team.”

Netball Proteas have been busy over the past few months with the Africa Netball Cup in Namibia and the Ireland series and Spar Tri Nations.

“It is important for us to play as much matches as possible. Some international didn’t get time to rest but it is not a problem to join the national team and play with the players who are based locally.”