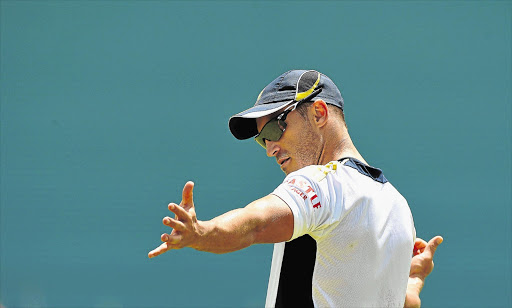 It's beyond all of cricket’s boundaries that one of the key members of South Africa’s dressingroom in England is celebrating the arrival of a new life even as another is mourning the loss of a loved one.

Faf du Plessis returned to that dressingroom during the first test at Lord’s having missed the match to be with his wife‚ Imari‚ to welcome their daughter‚ Amalie‚ into the world.

Nevermind what went wrong for South Africa at Lord’s on Sunday‚ how do they put things right for the second test at Trent Bridge in Nottingham on ...
Sport
4 years ago

Russell Domingo left this safe space in pain on Sunday and made his way home for the funeral of his mother‚ who has died in the wake of a car accident last month.

To be reminded that there are bigger‚ more important things in the world than mere cricket should serve as a sobering jolt for the South Africans.

So they were shot out for 119 in their second innings and lost the Lord’s test by 211 runs.

So they will have to find a way to perform better in the second test‚ which starts in Nottingham on Friday.

And if they don’t? Will it matter?

But someone will mark out a run-up at Trent Bridge on Friday and someone else will face the first ball‚ and cricket will go on even though life will seem to stand as still as death.

These truths are as inescapable as the fact that South Africa will have to deal with from the disappointment of what happened at Lord’s efficiently if they are to not go 2-0 down.

And that on a tour that has already seen them lose the one-day and T20 series and embarrass themselves in the Champions Trophy.

“It’s really important that after this test we don't fall into a mental hangover [for] the tour we have had so far‚” Du Plessis said.

“That will be one of my most important jobs and the senior players this week: how to make sure we stay well away from that and focus on the next test match.”

Du Plessis will reclaim the captaincy from Dean Elgar‚ who is the kind of decent man who will beat himself up for what happened under his watch.

Someone is going to have to tell him not to‚ not least because he is a crucial cog in a batting line-up that needs to find a way out of the miasma of mediocrity they have descended into.

Lord’s almighty, the party what a pasting

It all looked so different at lunch at Lord’s yesterday when South Africa had bowled themselves, it seemed, to an unlikely victory over England in ...
Sport
4 years ago

Someone is also going to have to tell JP Duminy that he won’t play in Nottingham‚ not after recording his 10 innings of fewer than 50 in his last dozen test innings.

“JP will be the first guy to say he knows he needs to score runs for this team; it’s no different for anyone else‚” Du Plessis said.

“He knows at the end of the day that it’s about runs. He understands that if it has to come to a position where there is someone else that needs to be looked at … he will be the first to acknowledge that.

“He is a crucial part of our senior player group and he will always put the team interests above himself.”

Kagiso Rabada already knows he is out of the second test after earning a fourth demerit point for telling Ben Stokes to “f**k off” when he dismissed him in the first innings at Lord’s.

Annoying as Rabada’s recklessness was‚ his captain saw a silver lining.

“Every guy in cricket needs their natural instinct and personality to come out because that creates the best you.

“I would never expect him to apologise to the team.

“For me that’s showing what you’re made of. He is showing that he wants to do desperately well for his country.

“For not one second must he lose that.”

Just as South Africa mustn’t lose the reality that cricket is only a game.