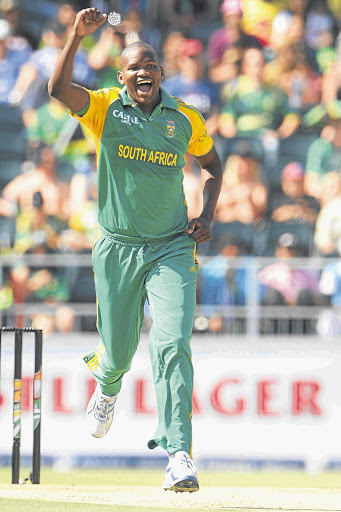 The fixing net snagged another big fish on Tuesday when Lonwabo Tsotsobe was banned for eight years after admitting his guilt.

Tsotsobe is the third former test player after Alviro Petersen and Thami Tsolekile and the seventh player overall to be exposed as corrupt by an investigation into attempts by Asian gambling figures to manipulate matches in the 2015 franchise T20 competition.

Gulam Bodi‚ who played two one-day internationals and a T20 international‚ was banned for 20 years‚ and Jean Symes‚ Ethy Mbhalati‚ Pumi Matshikwe‚ Tsolekile and Petersen for between two and 12 years.

The left-arm medium pacer was the No. 1 ranked bowler in ODIs between March and September 2012.

The release quoted a contrite Tsotsobe as saying‚ “I was‚ at the time‚ in a very vulnerable financial state and this dilemma too easily persuaded me to participate in spot-fixing.”

CSA chief executive Haroon Lorgat was at pains to point out in the release that “no fix actually took place”.

More positive spin came from the independent chair of CSA’s anti-corruption unit‚ former judge Bernard Ngoepe‚ who was quoted as saying‚ “I am satisfied that all the culprits have been duly prosecuted under the code and‚ unless we receive or uncover any new or previously undisclosed information‚ we believe we can now bring this matter to a close.

“We were fortunate that in this case the reporting structures that CSA and SACA [the South African Cricketers’ Association] have put in place worked.”

But Ngoepe also issued a warning that “we must remain vigilant to the continuing threat of corrupt activity in domestic and international cricket”.

Well might CSA want to conclude their investigation now what with the world’s best players set to wing their way to South Africa to staff the inaugural Global T20 in November and December.

Such tournaments are susceptible to corruption‚ and CSA will want to present their corner of the game as clean before the world’s gaze is trained on them. - TimesLIVE