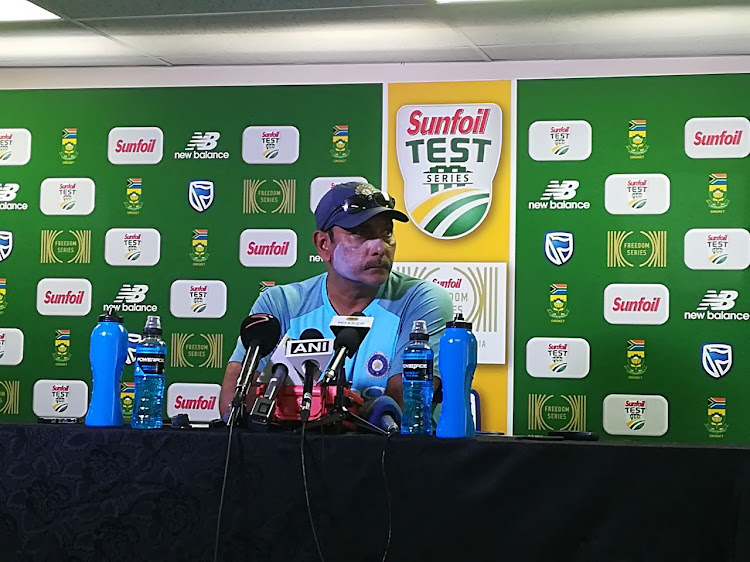 India coach Ravi Shastri has admitted that their late arrival in South Africa for the three match series against the Proteas has somehow contributed to their struggles in Cape Town and Pretoria.

The India players arrived in the country on December 29 with the first Test match scheduled for Cape Town on January 5 and they did not have a tour match to acclimatise to the unfamiliar conditions.

Speaking ahead of Wednesday's third and final Test at the Wanderers Stadium‚ Shastri admitted that ten days of practice ahead of the first match in Cape Town could have helped them a great deal.

“These are overseas conditions and in hindsight I would say another ten days of practice here would have made a difference but that is not an excuse‚" he said.

"We are playing on the same pitch and I would rather focus on the 20 wickets we have taken in the two Test matches.

"Those two 20 wickets gave us a chance in both Test matches but our top order did not fire as we expected.

“Unfortunately‚ the schedule is like that but I am hopeful that in the future when itineraries are made this type of issue will be taken into account and there is absolutely no about that.

"You must get here weeks earlier to prepare.”

With the Proteas on the verge of completing a whitewash over India‚ Shastri said his players are preparing well and they will be ready to make amends at a venue where they have not lost to South Africa after four matches.

In their four encounters here in Johannesburg‚ India have won one with the other three matches ending in draws.

They had chances in both Test matches to win but they did not make the most of it.

"If you believe you can win‚ you don’t look forward to a Test match and in my view it is as simple as that.

"I hope that mistakes‚ some of which were schoolboy errors‚ will be rectified.

"It’s tough conditions and there is not much between the teams‚ so you can’t afford to make mistakes like that‚” he said.

India captain Virat Kohli has been bitterly criticized for not fielding consistent teams in recent times and Shastri said they take hard decisions under tremendous situations.

“When you have choices‚ it will always be the case‚" he said.

"If Anjinkya (Rahane) played and did not do well‚ you will be asking me the question why Rohit 9Sharma) has not played.

"Rohit played and did not do well and you are asking me why Anjikya did not play and it is the same with the fast bowlers.

"Team management sits and discus various options on what is the best option and they stick by that‚” he said.

“We had our moments in both Test matches to do something special and we looked like the number one ranked team.

"We got 20 wickets in both matches which is a positive for us despite the fact that we have lost.”