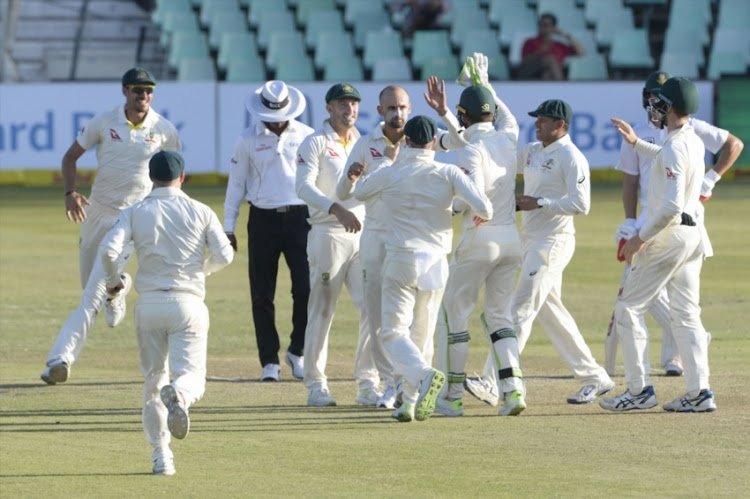 Nathan Lyon of Australia celebrates the wicket of Quinton de Kock of the Proteas with his team mates during day 2 of the 1st Sunfoil Test match between South Africa and Australia at Sahara Stadium Kingsmead on March 02, 2018 in Durban
Image: Lee Warren/Gallo Images

If you’re watching coverage of the Kingsmead test between South Africa and Australia and you hear someone say, “G’day ya cunning bastards,” do not adjust your set.

It might be your imagination. Or it might be what happens when the Aussies are caught out trying to create windows of opportunity to buy time to sledge their opponents.

The Sydney Morning Herald reports that “Australia have asked for the stump microphones to be turned down when the ball is not in play against South Africa as they prepare to turn the heat up on the Proteas”.

In other countries, as per International Cricket Council (ICC) regulations, the stump mics are faded when the ball is dead.

So viewers hear batsmen tapping their bat on the pitch, bowlers’ delivery strides and the sounds of whatever happens to the ball. The microphones are then muffled until bowlers stand at the top of their mark again.

But in South Africa the mics are often left open longer, gathering whatever audio is on offer.

It’s not difficult to understand why an organisation as fuddy-duddy as the ICC wouldn’t want that to happen, especially when their bread is buttered by television — a medium so conservative its insists on men wearing suits and ties outdoors in the heat of summer and frowns on women reading the news in sleeveless dresses.

Cricketers are famously filthy mouthed at the best of times, even more so when they locked in what they like to think of as mortal combat.

Can’t have the kids at home hearing that, can we. Nevermind that the kids at home and everywhere else are entranced by their phones and not at all interested in the cricket; test cricket in particular.

Australians are champions of salty language, but that’s probably not why they want the stump mics turned down.

Without the evidence being recorded, and as long as the umpires don’t hear them, they could say what they like to the South Africans.

It’s not a big leap from there to wonder about transgressions of the ICC’s anti-racism code, but Nathan Lyon told reporters this week that wouldn’t happen.

“We know where the line is,” Lyon said.

“We headbutt it, probably. But we are not going to go over the line.”

That said, in the same breath Lyon professed his adherence to the “what happens on the field stays on the field” mentality.

It didn’t at Kingsmead on Friday, where free advertising was broadcast to all, no doubt to the chagrin of the broadcasters, who sell that kind of stuff for a pretty penny.

Asked after the close if the players had mounted a protest to try and have the stump mics taken out of the equation between deliveries, Mitchell Marsh said, “I wouldn’t say it was a protest; it was a great opportunity to give our sponsors a bit of a plug.

“Quantas, thank you for getting us here safely.”

What did AB de Villiers think?

“It was quite nice today,” De Villiers said with a massive cheesy smile. “They were very friendly — compared to last time.”

The Australians have played this game within the game before.

In Bangladesh in 2006, and according to a contemporary report by the Australian Associated Press, former wicketkeeper-batsman Adam Gilchrist was heard telling Australia’s bowlers to “Get one for the boys at Travelex”, Lyon said.

“Phone home on 3 Mobile”, and — after taking a throw from Andrew Symonds, who was nicknamed “Roy” — “That’s the one, Roy. Plenty of energy from a Milo energy bar.”

But this time the joke is on the Aussies.

Quantas and the official airline, Emirates, have a code share agreement. An ad for one, therefore, is an ad for both.