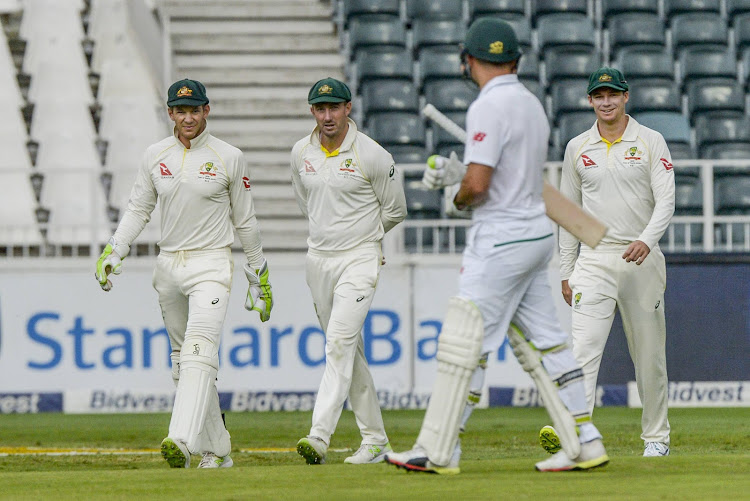 Players leave the field momentarily due to bad light during day 4 of the 4th Sunfoil Test match between South Africa and Australia at Bidvest Wanderers Stadium on April 02, 2018 in Johannesburg, South Africa.
Image: Sydney Seshibedi/Gallo Images

After more than a month in South Africa playing a Test series that in important ways was more taxing than even the Ashes‚ Australia would have been forgiven for looking forward to going home.

Instead‚ after everything that’s happened they might want to head for Mauritius or the Seychelles.

Or anywhere but Melbourne or Sydney‚ or other places where they will encounter Australians asking them what had gone so badly wrong.

But their captain‚ Tim Paine‚ is ready for exactly that: “We’ve maybe had our head in the sand a little bit over the last 12 months [thinking] if we continue to win we can kind of act and behave how we like and the Australian public will be OK with that.

“What we’ve probably found out in the past month or so is that the Australian public and our fans don’t necessarily like the way we go about it.

“It’s pretty simple — we have to listen.

“We have to take it on board and we have to improve our behaviour in the way we play the game.”

And not only because Australia relinquished the lead in a rubber they ended up losing 3-1.

“At the moment there is a fair bit of disappointment and borderline embarrassment in the dressingroom‚” Paine said.

He spoke at the Wanderers shortly before noon on Tuesday‚ minutes after his team had been thrashed by 492 runs in the fourth Test.

That was the fourth-biggest win‚ in terms of runs‚ in Test history and it sealed South Africa’s first series win over the Aussies in this country in 48 years.

To think Australia had arrived boasting the world’s No. 1 ranked batsman who was also their captain‚ a quality attack‚ and a hard-nosed coach. They leave in tatters.

Steve Smith has been relieved of the captaincy and banned for a year for his part in the ball-tampering scandal that exploded during the third Test at Newlands and escalated into a super nova of outrage.

Mitchell Starc‚ the leader of the attack‚ will be out for months with a stress fracture of the tibia.

Darren Lehmann‚ a man of gruff‚ forthright confidence‚ was reduced to tears when he announced that the Wanderers Test would be his last as coach‚ also because of the ball-tampering disaster.

But the biggest difference between the side who arrived in South Africa and the one leaving is David Warner‚ who got off the plane as vice-captain and has‚ like Smith‚ been banished.

Warner was the mastermind behind the ball-tampering plot that cost him‚ Smith and Cameron Bancroft their places in the team and turned them into‚ officially and indelibly‚ cheats.

He is the embodiment of the uncompromising‚ often unfair style of play Australia have championed for too long.

Now‚ with everybody including the prime minister‚ Malcolm Turnbull‚ questioning a previously vaunted team culture‚ the Warner way leads straight out of the door.

“We have to find the fine line between being really respectful of the opposition and the game and also being at a level that is really competitive‚ as you should be in Test match cricket‚” Paine said.

“It’s going to be a different style to what a lot of the guys are used to but once the new coach comes in and has his say we will go to it straightaway.”

Australia have been the ugliest team in cricket for decades‚ although with Warner not in their midst at the Wanderers they did soften to a degree that even Dean Elgar found “odd”.

The crusty opening batsman no doubt asking a few pointed questions about that after the Aussies knocked on South Africa’s dressingroom door on Tuesday.

“We’ve been invited in in the next half an hour‚ actually‚” Paine said.

“It’s an early beer‚ that’s for sure; it might be a coffee‚ but we’ll go next door.

“We’ve got some young players in our team who will learn a lot from going to have a beer with some of the experienced players that the South Africans have got‚ so we’d be foolish not to take that opportunity.”

After the Newlands Test‚ South Africa coach Ottis Gibson bemoaned the fact that the teams had not yet shared a drink — as they had after every match of India’s tour earlier in the summer.

That done‚ Paine said he and his team would look forward to “a clean slate”.

“It’s an exciting time. We’ll have a new coach‚ a new brand or culture or whatever you want to call it and guys are going to have a chance to have an input into that.

“As well as with the guys being out at the moment there are opportunities for guys to step up during that period of Test cricket.

“It will be good to get home‚ have a rest and think about it.”

And there’s plenty for the Aussies to think about.

Like‚ if South Africans ask you over for a beer‚ whatever time it is they sure as hell don’t mean coffee.