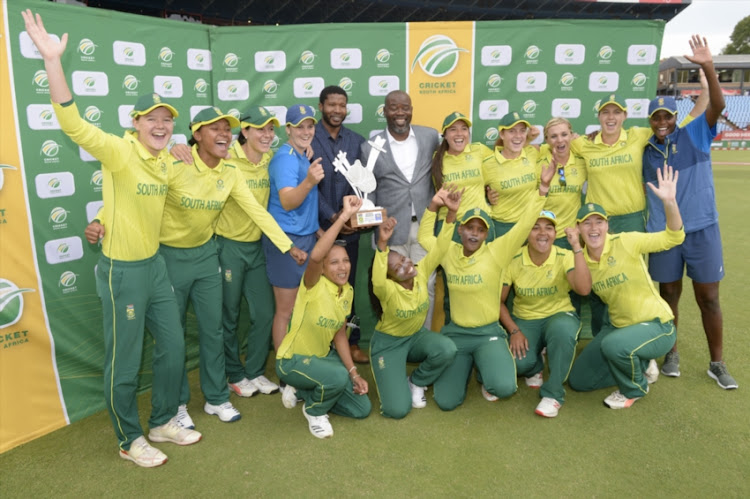 The Proteas women’s team made light work of their Sri Lanka counterparts with a 39 runs victory to complete a commendable 3-0 T20 series whitewash at SuperSport Park on Wednesday afternoon.

The South Africans came into this match with the series already in the bag following wins in Cape Town and Johannesburg and they had little trouble in finishing off the job against this modest Sri Lankan side.

Sri Lanka won the toss and chose to bowl first but the move backfired as the Proteas posted a highly competitive total of 163/5 with captain Dane van Niekerk‚ Tazmin Brits and Lara Goodall scoring 38‚ 36 and 35 respectively.

With ball in hand‚ Nadine de Klerk claimed three wickets and Shabnim Ismail got two while Marizanne Kapp‚ Sune Luus and Masabata Klaas returned with one with each as they restricted Sri Lanka to 124 after 20 overs.

The first wicket to fall was Brits when she was caught by Shashikala Siriwardene from Inoka Ranaweera on 36 and in the tenth they suffered a minor setback when Van Niekerk retired with a stomach bug on 35.

Van Niekerk‚ who was named player of the series‚ was able to return to the pitch and finish her innings before she was dismissed in the final over having added three runs to her score.

A few overs after Van Niekerk was forced to leave the field‚ South Africa lost Marizanne Kapp (19) but the home side managed to hold things together until Goodall returned to the pavilion in the 19th over.

Goodall‚ who came on after Van Niekerk was forced off the field‚ departed having scored a solid knock of 35 off 30 when she tried to punish a delivery by Kavisha Dilhari only to be caught at long on by Chamari Attapatu.

South Africa’s middle order suffered a collapse in the final over as they lost the wickets of Sune Luus and Van Niekerk in successive balls as they settled for a competitive score of 163.

South Africa’s defence of their total went off to a good start when Kapp bowled out Prasdani Weerakkody (0) with the second ball and Hasini Perera (13) soon followed when she was outdone by Nadine de Klerk to leave Sri Lanka needing 128 runs from 74 balls.

The focus shifts to the three-match ODI series to be played at Senwes Park in Potchefstroom between 11 and 17 February.