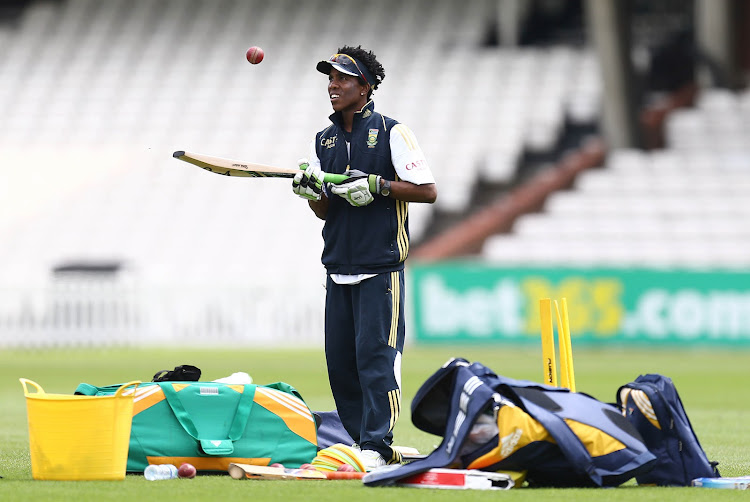 Former Proteas wicketkeeper Thami Tsolekile may make a sensational return to cricket following apparent “secret talks” to have his 12-year ban for his involvement in match-fixing overturned.

TimesLIVE can reveal that Cricket South Africa (CSA) and the players’ union, the South African Cricketers' Association (Saca), have recently been in touch with the former Test player.

“It [CSA and Saca talking to Tsolekile behind the scenes] has been happening for a while now, and it has all happened secretly,” said one of three independent sources who spoke to TimesLIVE.

Two other sources also confirmed the behind-the-scenes discussions, which follow a public spat earlier this year in which Tsolekile publicly cast doubt on the CSA’s 2016 investigation that led to his ban.

The insiders said CSA and Saca wanted Tsolekile to make a written submission to motivate why the 2016 sanction should be overturned.

Tsolekile told TimesLIVE he did not know about the discussions between CSA and Saca. He declined to share details when asked about “secret talks” between himself and the embattled cricket body.

“No, my brother, let’s leave this. I don’t know what you are talking about. I don’t want to talk about it,” he said.

On Wednesday, the former Test player confronted TimesLIVE via WhatsApp about the “intention” of this report, asking where the information came from and adding: “You [are] trying to paint me as a bad person and I did ask you earlier … [what] you [are] trying to prove in your story, and if you want to write shit about [me] and lies … and I will deal with you. If you think you know me, trust me you don't.”

However, Saca on Wednesday admitted that talks with Tsolekile were continuing through communications manager Zoli Xhola.

Xhola insisted, though, that it was Tsolekile who had approached the players’ union: “We can confirm that Thami approached Saca and enquired as to how he should go about having his sanction for breaches of the anti-corruption code reduced. We advised him that the decision would rest with CSA, and that he should therefore make written submissions to CSA.”

Acting CSA CEO Kugandrie Govender said she was not aware of any talks between the organisation and Tsolekile, but admitted that such discussions could be continuing in one form or the other without her knowledge.

“I’m not aware,” she told TimesLIVE. “That said, it does not necessarily mean the talks you are talking about are not happening or may be happening.

By the time of publication, the CSA board had not responded with a statement to confirm or deny the discussions with Tsolekile, as promised earlier on Wednesday.

Tsolekile, who played three Tests for the Proteas in the 2004/05 season against India and England, has already met a representative from Saca, according to the highly placed sources.

The Langa-born wicketkeeper was one of five former Lions players who were banned for their involvement in the match-fixing scandal related to the 2015 Ram Slam Twenty20 tournament. Pumelela Matshikwe, Ethy Mbhalati, Alviro Petersen and Jean Symes were also sanctioned for transgressions of the CSA’s anti-corruption regulations.

Some players were punished for allegedly accepting money from former bookies attached to Protea Gulam Bodi, who is serving a 20-year ban for his lead role in the scandal. Others were sanctioned for failing to disclose approaches from bookmakers, as is required by the cricket body’s anti-corruption unit.

Tension between former players and CSA

The match-fixing scandal returned to the spotlight in July this year when Proteas fast bowler Lungi Ngidi announced his support for the Black Lives Matter movement during a media interview. His stance opened a can of worms in the cricket fraternity when white former Proteas attacked him for his views.

The move sparked tensions with CSA when black former players spoke publicly about what they called a perpetuation of injustices they had experienced during their time in the Proteas fold.

Tsolekile gave three interviews in eight days on SABC Radio sports show Marawa Sport Worldwide in August to highlight the injustices he said he had suffered during his time in the team.

Two other former Proteas, Petersen and Lonwabo Tsotsobe – who were also subsequently banned for two and eight years, respectively, for their alleged involvement in the match-fixing scandal – also made appearances on the SABC show.

Complaining that they had been targeted as black players, and that they were not guilty of any spot-fixing but had been coerced to sign admission-of-guilt statements, they said the investigation had lacked credibility and integrity.

Responding to the former players in a statement, CSA insisted the investigation’s credibility had been unquestionable. It said the probe had been carried out by its anti-corruption unit under the guidance and authority of retired Judge Bernard Ngoepe.

The latest revelations, about the talks with Tsolekile, are likely to bring renewed scrutiny to the players’ claims and amplify their reservations over CSA’s handling of the probe.

Tsolekile turned 40 last week and is unlikely to return to cricket as a player should his talks with CSA and Saca bear fruit. Insiders said he was looking to give back to the game while making a living from it, after not earning a stable salary for four years.

In a rare display of cross-party unity, parliamentary committee tells board to step aside, demands independent probe
News
1 year ago

Cricket South Africa’s (CSA) presentation in parliament on Tuesday started on a dramatic note after acting president Beresford Williams was asked to ...
Sport
1 year ago