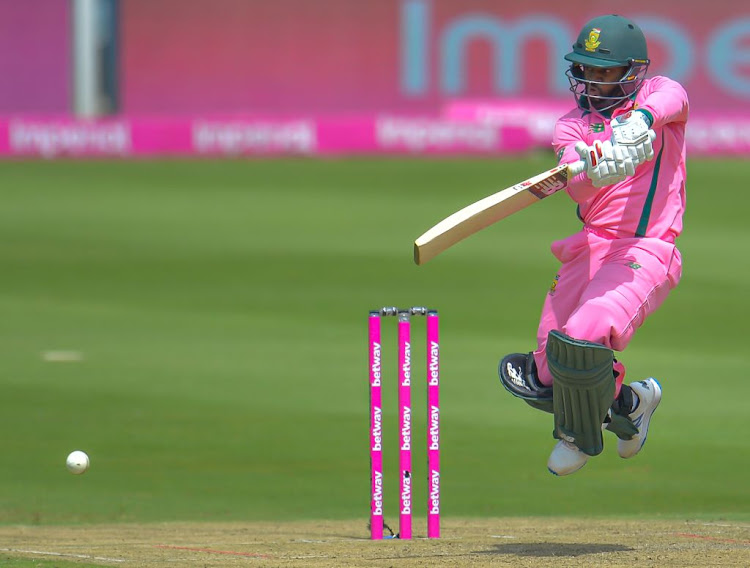 Fakhar Zaman's record-breaking century came in vain as South Africa levelled the ODI series against Pakistan with a 17-run win in their Pink Day clash on Sunday.

As Fakhar grew in confidence‚ worryingly, the South African attack and fielding became more ragged. Those are areas the hosts would want to tighten up.

The opener's knock surpassed the 175 of Herschelle Gibbs as the highest individual score in an ODI at this ground. In the end‚ however‚ it was a bridge too far, especially with the next highest contributor mustering just 31.

The match‚ which this time had to be played sans its usual glitz and glamour‚ lost some of its gloss midway through the Pakistan chase as Anrich Nortjé helped draw the sting from the contest.

Nortjé who took 4/51 in Centurion in the first ODI‚ picked up where he left off. His opening burst of five overs, registering 3/14, delivered body blows from which Pakistan never recovered.

Kagiso Rabada started well enough in his first two miserly overs but he lost the plot in the third when six wides went against his name.

Lungi Ngidi was consistently wayward in his opening burst going for 32 in his first four. He did, however, pick up the scalp of Imam ul Haq.

The opening pair's lack of control enabled Pakistan to make a sprightly start but the introduction of Nortjé from the Golf Course End‚ rather stopped them in their tracks.

Pakistan's supremely gifted captain Babar Azam would have had to be central to a successful chase but he will be bitterly disappointed that he fell to an ill conceived hook in Nortjé's first over.

Two legitimate balls later Nortjé had Muhammad Rizwan caught at slip before the Warriors' paceman bagged a third wicket when Danish Aziz was caught behind reducing Pakistan to 85/4.

Even with the swashbuckling opener Fakhar still at the crease‚ Pakistan's run rate dropped appreciably as Nortjé, with a mixture of hostility and accuracy, turned the screw.

By the time he returned to the attack in the 30th over Pakistan needed more than nine an over. Like some of the South Africans earlier in the day‚ Fakhar too had to bat with a degree of restraint at times. His 50 came off 70 deliveries but he need just 37 more to bring up a well deserved 100. He needed just 21 more to reach 150.

Fakhar's ability to access the leg side boundary remains something to behold. He took a shining to Tabraiz Shamsi's left arm tweakery from the Corlett Drive End and left a significant imprint on the Unity Stand's empty seats, as he did on the bowler's figures.

Unfortunately for the visitors, he was a lone crusader. By contrast, the South African innings lent more on the collective. It was like a snowball hurtling downhill.

It took a while to get going but grew in size and energy with the passage of time and was largely built around captain Temba Bavuma, with 92 off 102 balls. There were telling contributions too from Quinton de Kock (80)‚ Rassie van der Dussen (60) and David Miller (50 not out).

While De Kock set the foundation and Van der Dussen and Miller helped create towering spikes in the Manhattan of the innings‚ it was Bavuma who gave the South African effort its lofty dimensions.

Given how South Africa batted two days earlier‚ the occasion demanded a captain's knock, and with patience and precision the hallmarks of his stay‚ Bavuma rose to the occasion.

Pink Day has provided many enthralling moments at the Bullring

For sheer sensory extravagance there is little in the world of cricket that matches a Pink Day ODI at a packed Wanderers.
Sport
1 week ago

A maiden career century by Rassie van der Dussen was overshadowed by Babar Azam’s commanding ton as Pakistan beat the Proteas by three wickets in the ...
Sport
1 week ago
Next Article