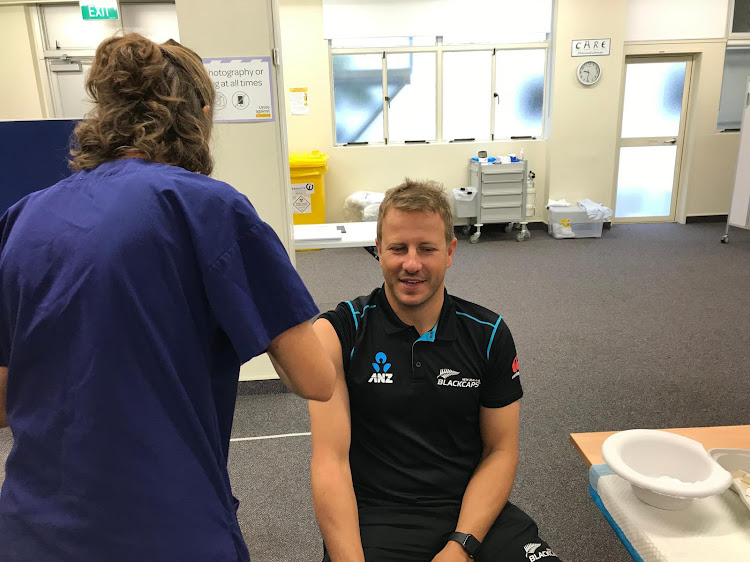 New Zealand Cricket posted a picture of South African-born cricketer Neil Wagner receiving the jab for vaccine in Tauranga April 20 2021. The organisation announced that Wagner was the last of the New Zealand based players to receive the first of two doses ahead of departure to England in May.
Image: New Zealand Cricket/Twitter

New Zealand Cricket (NZC) said on Tuesday all of its home-based players heading to England for a two-match test series and the World Test Championship final have received their first dose of a Covid-19 vaccine.

The New Zealand government said last month it would allow athletes to jump the queue in the country's vaccine rollout to allow them to participate in events of "national significance".

The country has also started administering vaccinations to its athletes ahead of their departure for the July 23 to August 8 Tokyo Olympic Games.

The cricket team will travel to England for a two-test series starting on June 2 before facing India in the ICC World Test Championship final on June 18 at Southampton.

NZC posted a photo on Twitter of paceman Neil Wagner getting his injection on Tuesday.

"He's the last of our New Zealand-based players to receive the first of two doses ahead of departure to England in May," NZC tweeted.

ESPNCricinfo reported that New Zealand may need to "patch up" the test side against England, as players from the IPL would need extended quarantine with Britain adding India to its travel "red-list" on Friday.

All-rounder Colin de Grandhomme said he had returned to training following ankle surgery and would be ready to play when needed.

"Since I've had the surgery the ankle has felt real good and it seems to keep getting better and it feels normal again for a change," De Grandhomme was quoted as saying by ESPNCricinfo.

"Looks like I'm tracking well at the moment and should be ready to go for ball one if I'm needed."

Sports minister Nathi Mthethwa threatened to unleash his might on Cricket SA's members' council at the weekend.
Sport
1 year ago

Sports minister Nathi Mthethwa has issued an ultimatum to the Cricket South Africa (CSA) members council and given them until the end of business on ...
Sport
1 year ago

Minister of Sports Nathi Mthethwa has told the members council of Cricket South Africa (CSA) that they have left him with no choice but to invoke his ...
Sport
1 year ago

Powerful Indian cricket board goes into bat for Olympic inclusion

Cricket's bid for Olympic inclusion has received backing from the Indian board which said it was now keen to help the game become part of the world's ...
Sport
1 year ago

Arguably one of Cricket SA's (CSA) most pressing meetings yet teetered on the brink before descending into farce yesterday.
Sport
1 year ago