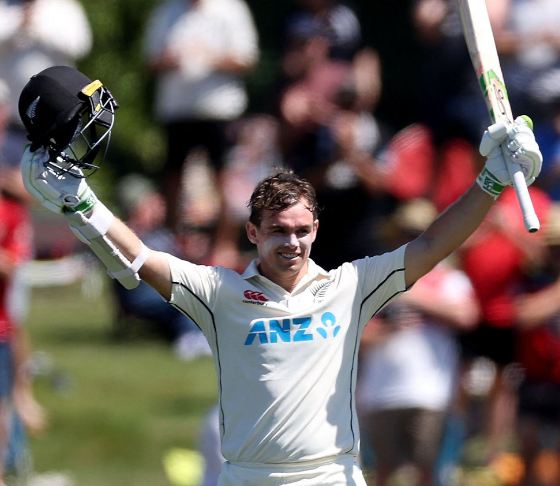 Tom Lathm became only the second New Zealand criketer, after Stephen Flemming, to boast scores of 250 plus in test cricket.
Image: @ICC/Twitter

New Zealand skipper Tom Latham smashed 252 before Trent Boult and Tim Southee wrecked Bangladesh with the ball to put the hosts on course for a series-levelling victory on day two of the second and final test in Christchurch on Monday.

Smarting from their shock defeat in the series opener at Mount Maunganui, world test champions New Zealand racked up 521-6 before declaring their first innings at the Hagley Oval.

"As a team, we're not about the milestones etcetera but it definitely does feel great to join an elusive club," Boult told the official broadcasters.

"Pretty good conditions, a little bit of swing, and I thought we used the bounce and pace that was on offer at this beautiful ground quite nicely."

Devon Conway, who was unbeaten on 99 on Sunday, hit the first ball of the day for a boundary to score his third century in his fifth test.

Conway was run out for 109 having featured in a 215-run stand with Latham.

Resuming on his overnight score of 186, Latham brought up his 200 with a cover-driven four off Taskin Ahmed and went on to become only the second New Zealand player, after Stephen Fleming, to possess two 250-plus scores.

The captain clobbered his Bangladesh counterpart Mominul Haque for two sixes in three balls but was dismissed going for a third.

He hit 34 boundaries in his more than nine-hour vigil.

When they returned, Boult and Southee reduced Bangladesh to 11-4 inside seven overs with Latham taking two catches in the slip.

Bangladesh slumped to 27-5 when Liton Das fell to Boult before Yasir Ali (55) and Nurul Hasan (41) resisted with a 60-run partnership.

Usman Khawaja scored his second century of the match to help Australia to 265 for six declared on the fourth day of the fourth Ashes Test on ...
Sport
1 week ago

Usman Khawaja's fairytale comeback has presented Australia with a selection headache, and captain Pat Cummins conceded it would be hard to drop the ...
Sport
1 week ago