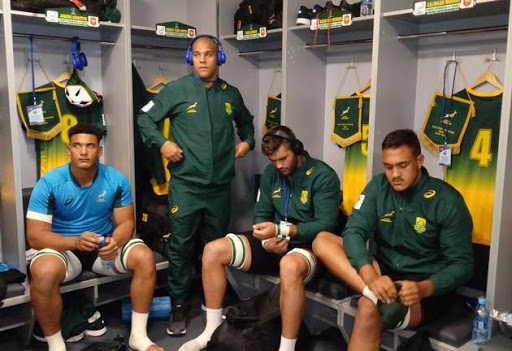 Some members of the Junior Springboks seen here in the dressing room before their Rugby World Cup opening match against France on 31 May 2017. The match ended in a 23-all draw.
Image: Junior Springboks via Twitter

South Africa 23 (10) France 23 (12) An injury time try from No 8 Juarno Augustus and a pressure-laden conversion kick by flyhalf Curwin Bosch earned the Junior Springbok a draw in their World Championship opener in Tbilisi on Wednesday.

France dominated most parts of the match and held a 10-point lead after an hour in difficult‚ wet and windy conditions in the Georgian capital‚ but failed to fully punish an error-strewn South African performance.

Augustus was immense in an otherwise forgettable outing by the Junior Boks while Bosch struggled in general play‚ but was flawless off the kicking tee with two conversions and two penalties.

France flyhalf Romain Ntamack‚ son of former French wing Emile‚ caught the eye with a superb display‚ which included two nerveless second half drop-goals that gave his side a cushion as the match entered the last quarter.

Ntamack profited from a good platform by the forwards and impeccable service and direction from scrumhalf Baptiste Couilloud.

The Junior Boks made a fast start‚ playing with a strong wind in the driving rain running into a 10-0 lead after seven minutes.

Augustus scored from a pick-and-go close to the line in the second minute‚ which Bosch converted and then added a penalty to set the Junior Boks on their way.

But when France fullback Romain Buros scored after charging down a lethargic clearance by Kruger at the restart‚ the momentum shifted.

SA wing Wandisile Simelane was sin-binned for a trip‚ and was followed to the bin by prop Gerhard Steenekamp for repeated infringements close to their line.

With 13-men there was no way SA could hold out the French pack and it was hooker Florian Dufour who went over for France’s second try to give them a surprise lead at halftime.

Junior Bok coach Chean Roux will have some hard work ahead because it was a performance littered with handling errors and basic mistakes.

The conditions were not easy‚ but France coped better in the circumstances and will rue a chance to finally beat SA at this level in their fifth attempt.

The SA pack scrummed well and the lineouts were solid in the trying elements.

Defence close to the fringes was also good but out wide the lightweight SA backline was passive at times‚ allowing France to make useful inroads.

The Junior Boks next meet hosts Georgia in Tbilisi on Sunday.