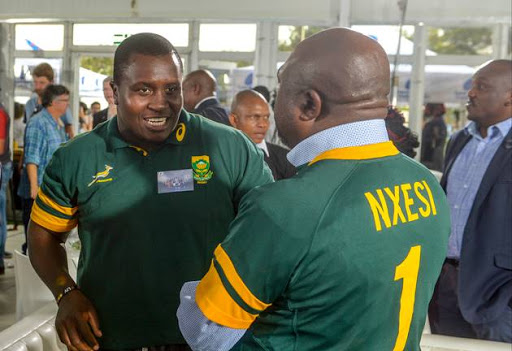 Nxesi has warned that should Saru fail to meet transformation targets the government could withdraw its support.

"Transformation is not an event; it is a process and to be direct, this World Cup will address this government priority," Nxesi said in Pretoria yesterday.

"We have engaged with Saru and they have committed to meeting their targets according to the sports development plan.

"If you can remember, former sports minister Fikile Mbalula banned certain sporting codes from bidding until they met targets. Rugby was one of those federations.

"Saru has met its targets but we have put conditions we will continue to assess.

"We lifted the ban, which resulted in them starting the bidding process late."

"We see it as an economic bid based on projections to check what is there for us. We have experience and we have learnt from the mistakes of the 2010 World Cup. A lot of work still has to be done to be able to [win the bid]."

Saru CE Jurie Roux reaffirmed the union's commitment to transformation and added that the tournament would not burden the fiscus.

"We believe in transformation, which is less stress for us at the moment," Roux said.

"We believe as a country that we have a technically superior bid and we will be able to host one of the best tournaments.

"We have contingency plans to upgrade the stadium in terms of the pitches. We have hotels and other infrastructure, and we are confident we will be able to make a profit.

"Our price parity compared to Europe is good and we can host the tournament for the third of the price of countries in Europe," said Roux.