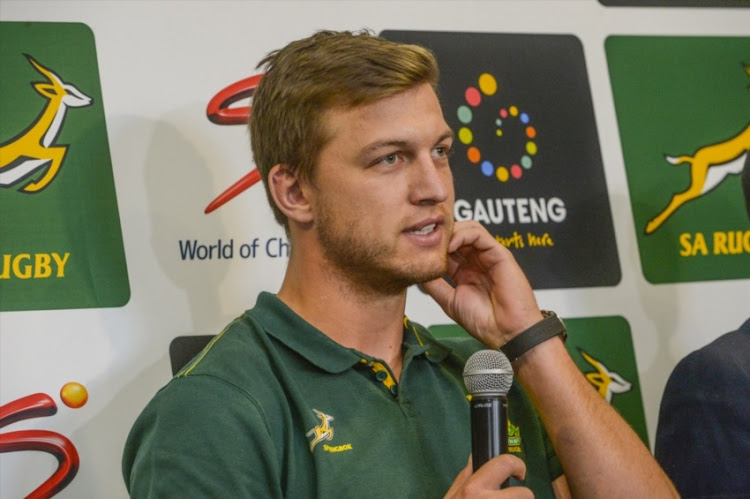 Handre Pollard of the Springboks during the Launch of the SA A v French Barbarians clash at Orlando Stadium on May 15, 2017 in Johannesburg.
Image: GALLO IMAGES

Flyhalf Handré Pollard was a surprise inclusion in the Springbok squad for the Australasian leg of the Rugby Championship named by coach Allister Coetzee on Tuesday.

Pollard‚ 23‚ has played six games in the past 16 months due to severe ankle and knee injuries‚ but has been rehabilitating and training with the Bulls in recent weeks.'

He has played 20 Tests and scored 188 points‚ and despite his age‚ brings added experience to the backline.

Talented Sharks playmaker Curwin Bosch‚ who made his Test debut against the Pumas in Port Elizabeth two weeks ago‚ drops out to accommodate Pollard.

Western Province utility back Dillyn Leyds and fit-again scrumhalf Ross Cronje were also added to the group after missing the brief tour to Argentina where the Boks beat the Pumas 41-23.

Leyds is preferred to centre Francois Venter‚ who won’t tour.

He will no doubt be hastened into the Cheetahs squad for Friday’s PRO 14 opener against Ulster in Belfast while Jano Vermaak makes way for Cronje’s return.

“Handré was really impressive during the two weeks he spent with us in Port Elizabeth‚” Coetzee said.

“Even though he was fit and available for the away match against Argentina in Salta‚ we made a decision that another week of conditioning will be beneficial for him.

“I believe he is fit and ready to go and he will be utilised in a versatile role‚ covering centre too. He is the kind of player that really thrives in the Springbok environment and is very coachable.

"It must be said that he also made huge improvement in terms of his skill levels and the understanding of this team’s technical plan.

“Curwin has grown a lot during his time with us‚ and all our coaches are pleased with his current development.

"He knows what is expected of him in this environment‚ and like I said before‚ it is my responsibility to manage him properly at international level.

“We would like to see him carry the confidence he has gained during his time with Springboks into the Currie Cup.”

The versatile Leyds featured in the three-Test series against France in June and has played consistently well since returning to WP‚ paving the way for his Springbok return.

“Dillyn covers wing‚ fullback and if needed he can slot into to flyhalf as well. He has continued to impress while playing for his province in the Currie Cup competition‚” said Coetzee.

Meanwhile‚ the Springboks will know the full extent of the rib injury to prop Coenie Oosthuizen by Wednesday. He is scheduled to undergo a scan later on Tuesday.

The rest of the touring squad to Argentina was kept unchanged for the next two away matches in Australia and New Zealand.

The Springboks face the Wallabies in Perth on 9 September and meet the All Blacks a week later in Albany.

The Springbok squad to Australia and New Zealand: