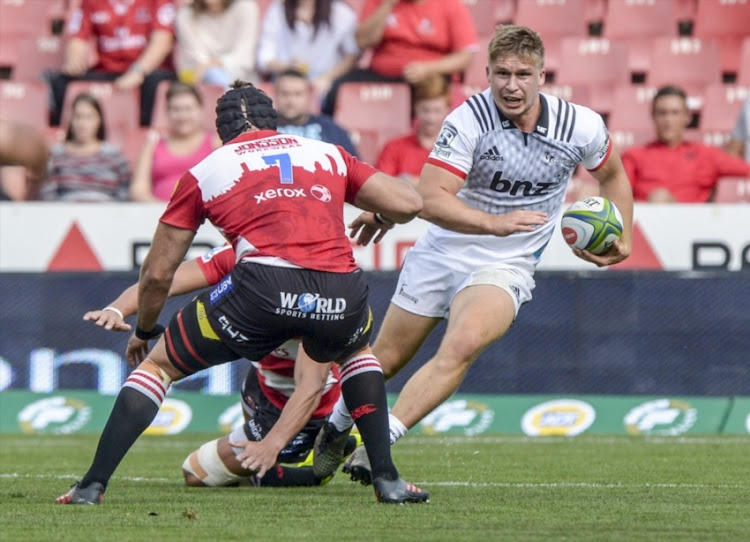 Jack Goodhue of the Crusaders with possession during the Super Rugby match between Emirates Lions and Crusaders at Emirates Airline Park on April 01, 2018 in Johannesburg, South Africa.
Image: Sydney Seshibedi/Gallo Images

There was something distinctly April’s Fool-ish about this Easter Sunday clash in that for long passages it seemed neither side had turned up.

Last year’s finalists went toe-to-toe in a match that was drab and strewn with error. That the Crusaders chalked up yet another win over the Lions is in large part due to their nous and craft as the defending champions found ways, particularly around the contact areas, to stifle the Lions.

Not that the Lions impervious to self destruction. Far too often they spilled the ball in contact, but at times even a basic requirement like passing was found wanting.

Elton Jantjies who is capable of the sublime, didn’t operate in that realm on Sunday, while his opposite number Mitchell Hunt carefully sought and found his intended targets. Jantjies at times put his team under undue pressure through elementary errors.

To be fair, neither side could make much headway with ball in hand. The breakdown was feverishly contested with the ball carrying side rarely able to secure clean possession from which to launch.

Crusaders wing George Bridge touched down twice inside the first 25 minutes but on both occasions the final pass was ruled to have gone forward. Bridge proved more than a handful though, while fullback David Havili is a wonderfully intuitive runner.

Despite the potential potency of the Crusaders’ attack the Lions’ defence, which had been the most maligned element of their game thus far this season, largely stood firm.

Former defence coach JP Ferreira’s departure to Munster had been mourned in recent times, but the Lions seemed hell bent on maintaining the structural integrity of their defensive lines.

It proved impenetrable in the opening half as the home side repelled the Crusaders’ advances. Cyle Brink’s hit on Sam Whitelock knocked the All Blacks giant sideways and served to exemplify the Lions’ white knuckle approach to the tackle.

The hosts kept the defending champions scoreless in the first half but they were always going to face a sterner challenge in the second.

And so it proved as the Crusaders eventually unlocked the hosts’ defence when captain Whitelock rounded off in the 51st minute after the visitors had bashed away relentlessly.

If that try required the tourists to expend much energy, they barely broke a sweat in Jack Goodhue’s touchdown a few minutes later. Replacement wing Manasa Mateale is a man of vast dimensions and he used his large frame to wreak havoc on
the Lions’ defenders. He bounced and shrugged off some wound be defenders from a position of limited promise but by the time he offloaded to Goodhue the only conclusion was a try for the Crusaders.

The defeat, the Lions’ third in four matches, has plunged their campaign into turmoil. Swys de Bruin and his coaching staff will have some tough decisions to make in the coming weeks but they may yet find salvation in a conference in which mediocrity is all too prevalent.