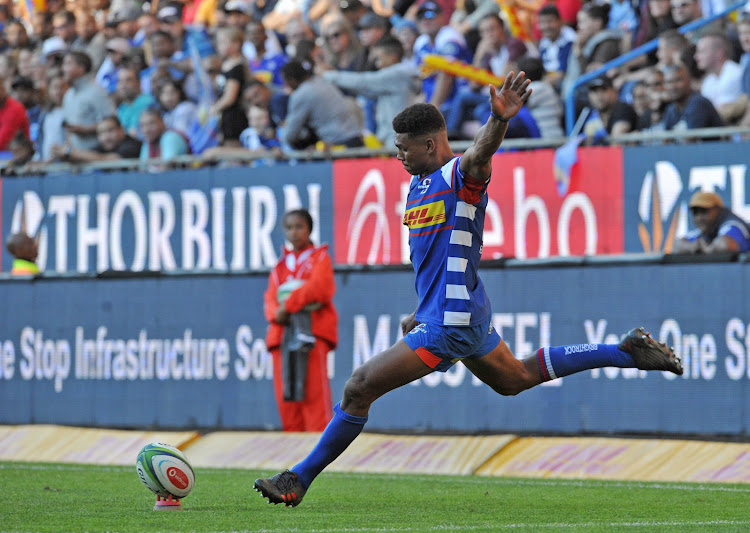 Damian Willemse of the Stormers kicks at goal during the 2018 Super Rugby game between the Stormers and the Bulls at Newlands Rugby Stadium, Cape Town on May 5 2018.
Image: Ryan Wilkisky/BackpagePix

The Junior Springboks confirmed on Monday that both star flyhalf Damian Willemse and No 8 Muller du Plessis had been ruled out of the remainder of the Under-20 World Championships in France.

Willemse suffered a knee injury in the team’s second match against Ireland on Sunday‚ which will sideline him for four to six weeks.

Du Plessis injured a gluteal muscle in the same match‚ and is expected to be out for between two and four weeks.

The Junior Boks beat Ireland 30-17 after edging Georgia 33-27 in their opening match to take a maximum 10 log points from their opening two matches of the tournament. SA meets hosts France in a Pool decider on Thursday.

Western Province flyhalf David Coetzer and harks No 8 Phendulani Buthelezi have been called up as injury replacements for Willemse and Du Plessis respectively.

Buthelezi and Coetzer both have Junior Springbok experience having featured in the team’s warm-up matches‚ with Buthelezi taking to the field in all three matches on the UK tour and against Georgia in Stellenbosch‚ while Coetzer played against Wales and England on tour.

With sufficient cover among the backs‚ as centre Rikus Pretorius and winger Sihle Njezula will return to action in the coming games‚ coach Chean Roux opted to call up a back and forward as replacements.

“It is never good when players suffer injuries‚” said Roux. “In Damian’s case particularly‚ if we really had to‚ we could probably have strapped him and played him in one of the playoff games.

"But if one looks at the bigger picture‚ it is better for him as a player and for South African rugby that he takes a break and does proper recovery so that he can be 100% ready to play again.

“He has had a very high workload this year at a high intensity‚ and although his injury is a big loss‚ it is better that he recovers properly so that he can return to action soon.”

Roux had full faith in Coetzer and Buthelezi and said: “It is certainly a positive to gain players like David and Phendulani.

"They have been in SA Rugby’s Elite Player Development system for a while now‚ and they were with us on the UK tour‚ so they know exactly what to expect from us and they will slot in with ease.”

Having had time to reflect on the match against Ireland‚ the coach said: “I think we played in patches‚ but our scrums were good.

"We usually have a very good lineout‚ but for some reason it didn’t function. So there are small changes we need make and I am sure we will rectify that for the game against France.”

With the match against France kicking off at 21h00 on Thursday in Narbonne‚ Roux said they would adapt the training schedule in the next few days to ensure that the players could adjust accordingly.

“We have changed our programme slightly so we will be training in the evenings‚” he said. “It is simply a case of resetting our clocks and I am sure everyone will adapt easily to that.”

David Pocock and Israel Folau might disagree fundamentally on the issue of LGBT rights but the Wallabies are united in believing their diametrically ...
Sport
3 years ago

Danny Jordaan says South Africans must give new Springbok captain Siya Kolisi the same respect they usually accord to black sports stars from other ...
Sport
3 years ago

Rassie Erasmus's tenure as Springbok coach started badly as his side went down 22-20 to Wales in Washington.
Sport
3 years ago

Cape Town – Losing pool matches is not something that happens often to the Blitzboks, but they dropped their final match in London on Saturday and ...
Sport
3 years ago