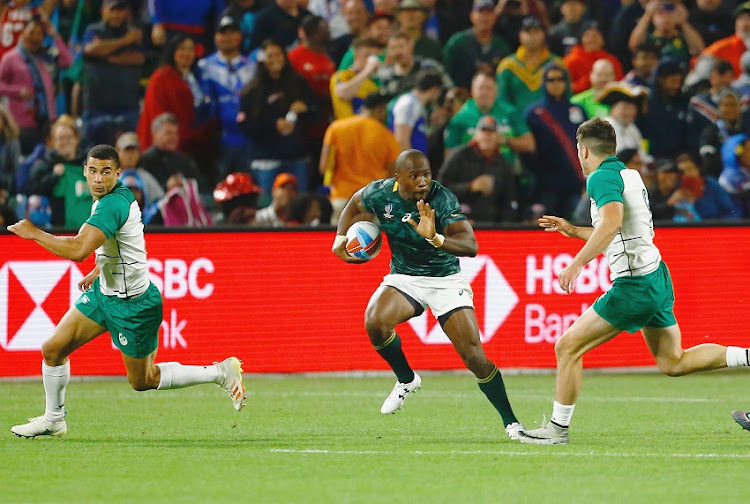 Siviwe Soyizwapi of South Africa during the Men's match between South Africa and Ireland on day 1 of the Rugby World Cup Sevens 2018 at AT&T Park on July 20, 2018 in San Francisco, United States of America.
Image: Martin Seras Lima/Gallo Images

Cape Town – Speedster Siviwe Soyizwapi became the first man since the 2005 Sevens World Cup to score four tries in a match as the Blitzboks secured a quarterfinal place against Scotland.

Soyizwapi was in rampant mood as South Africa thrashed Ireland 45-7 in their World Cup opener in San Francisco on Saturday to set up a last eight clash with the Scots.

"I was quite fortunate out there today," Soyizwapi said after becoming only the ninth player to score four tries in a Rugby World Cup Sevens match.

"The guys on my inside did all the work. When you have quality players like Justin Geduld, Werner Kok, Selvyn Davids and Rosko Specman feeding you try-scoring passes, my job is only to make sure I finish their good work," said the Eastern Cape-born winger.

Because the match was only played at 21:15 local time, the Blitzboks had an entire day to hang around waiting for the clash against Ireland, who beat Chile in round one.

As top seeds SA had a bye into round two, and to burn off some nervous energy waiting for their opening match, the team had a defence session in earlier in the day.

“It was an interesting start to have a defence session in the morning,” captain Philip Snyman said. “We needed to get the legs moving and the lungs burning.

Snyman said the Scotland match would be a tough one.

"The last time we played them, they actually beat us in Paris, so we dare not underestimate them. They are a quality side and we will have to be at our very best if we want to continue in the competition," Snyman said.

The SA women endured a tough day and were eliminated from the competition.

The defeats ruled them out of Cup and Trophy contention respectively and the team will now contest the 13th place play-off against Mexico on Saturday. Kick-off is at 18h30 (SA time).

Springbok Women's Sevens coach Paul Delport said the defeats hurt, but he was positive about the extended opportunity to play on the big stage.

“We really played well against Russia in our opening match, but against China we unfortunately did not deliver the same effort and commitment and I am not happy about that,” the coach explained.

“We are now playing Mexico, whom we recently beat in a tournament in Hong Kong, so we have high hopes that we can repeat that. This is also another opportunity for our players to play on a big stage like the World Cup and to experience the level of competition and exposure.”

The men's quarterfinals are: (SA times)