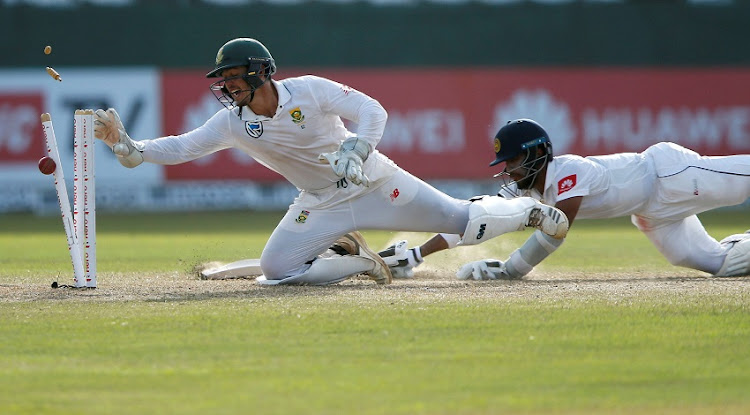 Hang on. Are we watching the highlights of last week’s game? We aren’t: again Sri Lanka’s tail wagged like a spaniel’s. Again South Africa’s batting was a tale of failure to come to terms with the conditions.

Again your Saturday morning would have been better spent shopping for tile grouting than watching a fine team crumble. And again Sri Lanka will win, weather and miracle permitting, this time to take the series 2-0.

In Galle last Saturday, South Africa were beaten by 278 runs before tea on the third day.

In Colombo this Saturday, after two days of the second test, they look on course for a similar fate.

Sri Lanka were 155/3 in their second innings at stumps, a lead of 365: already, on current form, way too many for South Africa to seriously contemplate chasing.

Seventy-four runs of the Lankans’ runs came in a last-wicket stand between Akila Dananjaya and Rangana Herath, who stopped a slide of five wickets for 41 runs to hold up South Africa’s progress for more than an hour.

Perhaps they should have batted for longer: the visitors were dismissed for 124 in 34.5 overs, or less than two-and-a-half hours in which they didn’t look anything like the team who have the best record of all non-Asian sides in the subcontinent.

As far below themselves as the South Africans played, they were slung a couple of inadvertent insults by their hosts.

Herath, the masterful left-arm spinner who has been his side’s key bowler since Muttiah Muralitharan retired eight years ago, was needed for just nine overs.

Sri Lanka’s captain, Suranga Lakmal, the only seamer in their XI, didn’t get a bowl. Nice work if you can get it: batting at No. 10, he made a four-ball duck.

So, exactly who put the skids under a line-up that, apparently, harbours three of the game’s top 20 ranked batsmen?

Off-spinner Dilruwan Perera, who added a haul of 4/40 to the match figures of 10/78 he claimed in Galle, and Akila Dananjaya — another off-spinner, who also bowls leg breaks and googlies — who took 5/52 in only his third test.

“Another tough day,” Ottis Gibson said in a television interview. “We haven’t covered ourselves in glory.”

Happily Gibson wasn’t talking about everyone. Keshav Maharaj’s 9/129 is second only to the 9/113 Hugh Tayfield took against England at the Wanderers in February 1957 as the best performance by a South Africa bowler in a test innings.

Thing is, the left-arm orthodox Maharaj the magnificent is the only specialist spinner in a South Africa side who are struggling to compete in conditions that are overtly, but not unfairly, tuned for turn.

With left-arm wrist spinner Tabraiz Shamsi and leg spinner Shaun von Berg wearing non-players’ bibs and looking on impotently from the dugout, was Gibson ready to admit the South Africans got that wrong? “Looking at where we are now you would probably say yes,” he said. “It’s not the best decision we’ve made.”