Boks need to switch focus from ‘that Tackle’ 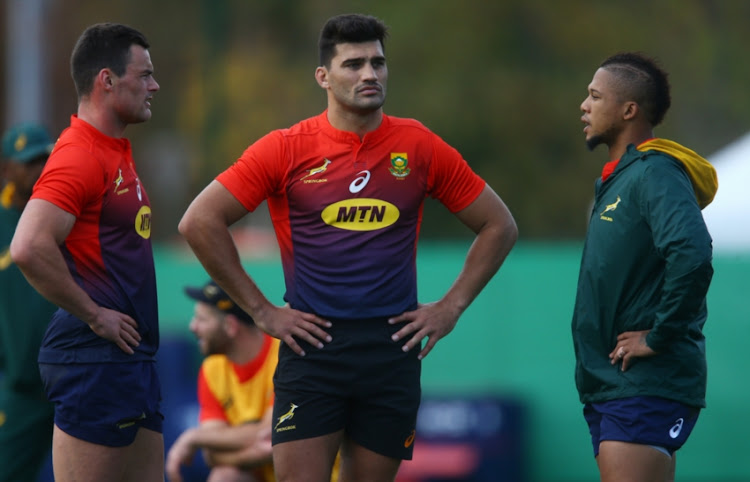 Springbok centre Damian de Allende admitted that England flyhalf Owen Farrell’s controversial tackle in the dying of embers of last week’s 12-11 Test loss at Twickenham had been heavily discussed among the squad.

Farrell’s 82nd-minute shoulder charge on Bok centre Andre Esterhuizen has been dissected across the rugby world and there are few‚ if any‚ analysts that believe referee Angus Gardner’s decision not to award a penalty was correct.

Bok coach Rassie Erasmus and defence expert Jacques Nienaber even went as far as making a tongue-in-cheek video at training in Paris on Sunday‚ urging Esterhuizen to hit higher and without arms. The video went viral.

Erasmus was making a not-so-subtle point to World Rugby‚ who have remained tight-lipped about the call.

In the immediate aftermath of the game‚ Erasmus deadpanned his way through a media conference‚ suggestion if Farrell’s tackle was legal then the Boks would start tackling that way too.

On Tuesday De Allende‚ who had a superb game against England‚ followed the same script.

The 34-cap centre denied that he had been through the same training drill as seen in the widely distributed video‚ but admitted ‘the tackle’ was a hot topic.

“We did speak about it‚” De Allende told the media in Paris. “Obviously there was a lot of hype about the tackle. It is what it is‚ that’s World Rugby’s problem.

“If that [the tackle] is right‚ we should also start tackling like that. There was nothing wrong with the tackle so we can also start doing that.”

The Boks need to be careful that they don’t fall into a victim mindset. They were wronged‚ that is universally accepted‚ but nothing is going to change the result against England now and the only way to atone is with a strong performance against France this Saturday.

Assistant-coach Mzwandile Stick was one member of the management who seemed to have rather focused his energy on the Boks’ shortcomings against England.

The Boks squandered numerous chances‚ so accuracy should be their main focus at Stade de France this weekend.

“We created opportunities against England and as coaches we can be positive about that‚” Stick said.

“The disappointing thing is that we didn’t convert them into points. We did that in the games against the All Blacks earlier this year.

“I don’t think we are going to change much in our plan‚ though. If you can create 20 scoring opportunities against England at Twickenham‚ you are doing something right.

“It’s always going to be difficult playing France in Paris. They’ve got physical players in the pack and midfield and it’s going to be tough.”

De Allende concurred: “The coaches put a lot of emphasis on preparation and we work hard during training camps and obviously fine-tune our gameplan in the week leading up to a Test‚” he said.

“Our approach to the matches up in the northern hemisphere has also changed a bit because you have to respect the conditions in Europe and the way the game is played up here.

“We learnt a lot from the Test that we lost against England in Cape Town in June‚ in very wet conditions.

“I think we are getting there‚ and we are working on how to vary our game so that we can constantly look for opportunities on the field.”