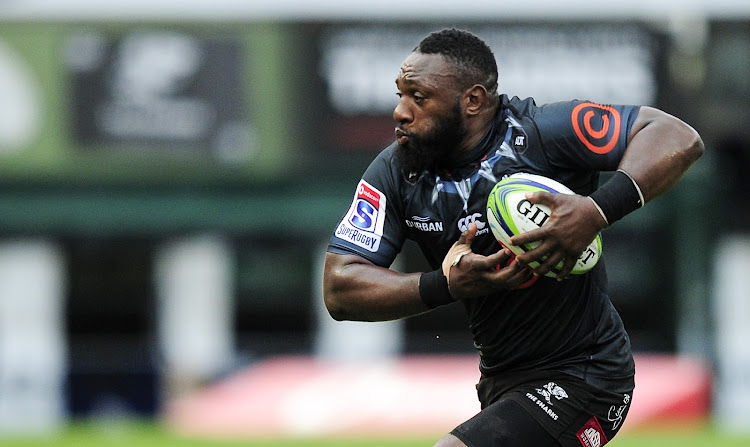 Tendai Mtawarira of the Cell C Sharks in action during the Super Rugby game against the DHL Stormers at Kings Park Stadium in Durban on March 2 2019.
Image: Gerhard Duraan/BackpagePix

When the Sharks swam up to the Loftus Versfeld pool three weeks ago‚ it was on the back of Louis Schreuder's 100th Super Rugby game.

That game is now remembered for the physical schooling the Sharks suffered at the hands of the Bulls.

One gets a sense that Saturday's return clash at King's Park will not only have a serious dose of revenge in store‚ but also to make Tendai “Beast” Mtawarira's record equalling 156th Super Rugby appearance a fixture to remember.

The seasoned loose-head prop is set to equal Adriaan Strauss's record but for captain Schreuder‚ the onus is on winning the game first before the matter of milestones.

The Bulls‚ who named their match-day 23 on Wednesday‚ put together an efficient 37-14 win on March 9 before both sides went on a bye.

However‚ they were on the receiving end of a 56-20 hammering against a resurgent Chiefs side that enjoyed Tshwane's dry sunshine last week.

The Lions’ coaching staff would have gone into the team’s bye week with a huge sense of relief.
Sport
3 years ago

After two consecutive defeats‚ the Sharks returned to winnings ways with a 28-14 home triumph against the Melbourne Rebels.

“It's a big nutshell because it's going to be a very big game. We got schooled at Loftus Versfeld but we learnt some lessons. Hopefully‚ we'll be able to apply them.

"It's also a home game so we need to use our home advantage and our crowd. It's going to be a physical battle and we need to be up for it mentally‚” Schreuder said.

Mtawarira will be starting at loose-head prop in a side that has two changes from the unit that saw off the Rebels last week.

Lwazi Mvovo steps in at right wing in place of S'bu Nkosi while Luke Stringer replaces Phendulani Buthelezi at flank.

Hooker Craig Burden is set to make his Super Rugby return from the bench while Kobus van Wyk fills in as the utility back in the absences of Jeremy Ward and Marius Louw through suspensions.

Up and coming Sharks fullback Aphelele Fassi didn't get the chance to show his wares against the Bulls earlier this month.
Sport
3 years ago

Sharks coach Robert du Preez was effusive in his praise of Mtawarira‚ who's set to play a key role not only for his franchise‚ but for the national team this year.

“When you speak about Beast‚ you need a long time to talk about him. It's not a cliché but he's a true legend of the game and he's been immense for us this year with his leadership on and off the field‚” Du Preez said.

“The way he's brought the youngsters into the team has been outstanding.”

Southern Kings on a tightrope with PRO 14

The Southern Kings will look to drastically improve performances next season to ensure their PRO 14 survival by signing a few high profile players ...
Sport
3 years ago