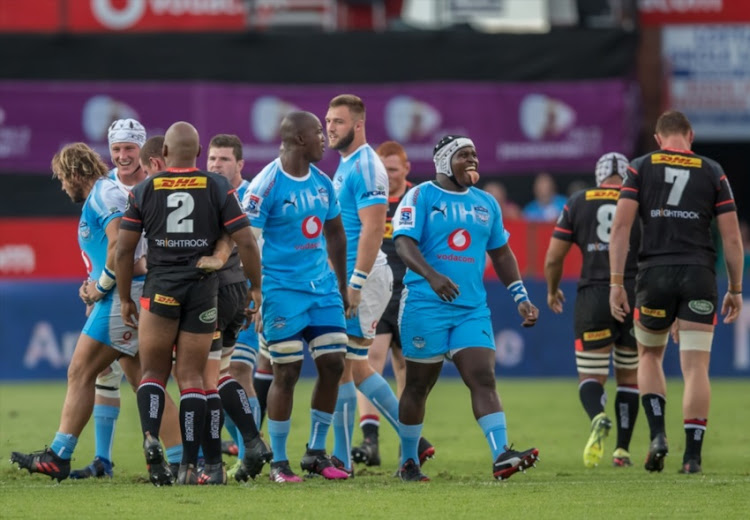 STORMERS Trevor Nyakane of the Vodacom Bulls could not contain his emotion after successfully disrupting the DHL Stormers scrum during the Super Rugby match between Vodacom Bulls and DHL Stormers at Loftus Versfeld on March 31, 2018 in Pretoria, South Africa.
Image: Gordon Arons/Gallo Images

The Stormers were always going to be up against it with six away matches in their eight fixtures‚ but Friday’s meeting with the Reds in Brisbane is a must-win clash for Robbie Fleck’s men.

Back-to-back losses against the Hurricanes and the Blues were disappointing but hardly a surprise as the Stormers’ losing streak stretched to 12 in a row in New Zealand.

They hoped to take a scalp in NZ but a more realistic target is a win or two in Australia. The Reds present the best opportunity although the Stormers are far from full strength.

Locks Eben Etzebeth and JD Schickerling are both out injured. So are tighthead Wilco Louw and centre Dan du Plessis while the indefatigable Pieter-Steph du Toit is on paternity leave.

It makes the task at Suncorp Stadium harder‚ but not insurmountable.

Last year’s 25-19 win over the Reds at Newlands was a spiteful affair with the Brisbane side playing on the fringes of the law. How prop Taniela Tupou stayed on the field after nearly decapitating Craig Barry remains one of the mysteries of the 2018 season.

Fleck expects another niggly encounter against a Reds side second-from-bottom in the Australian Conference and 13th overall on the log.

Stormers forced to change it up against Reds

Stormers coach Robbie Fleck has unsurprisingly made wholesale changes to his side to face the Reds in Brisbane on Friday after injuries forced his ...
Sport
3 years ago

“They tried to disrupt our game a bit [last year] with a few off-off-the-ball incidents‚ which we were not happy about‚” Fleck said. “We are expecting the same thing this week.

“They will definitely look to target our pack and unsettle us there. Our pack is doing really well at the moment and I’m sure that’s something they will look at.

“The Reds are a young side‚ they work incredibly hard and are very competitive at home. They have run everyone close this year and have been difficult to beat at home. They are combative and don’t mind mixing it.”

Fleck is still buoyant despite his side’s lack of killer instinct when losing 24-9 to the Blues last week and 34-28 to the Hurricanes the week before. The Stormers created numerous chances but squandered them all against the Blues.

“Tactically we have been pretty smart‚” Fleck said.

“Against the Hurricanes‚ we identified an opportunity up-front which worked for us‚ but we probably kicked too early‚ which let us down. We should’ve held onto the ball a little longer and created a few more opportunities.

“Against the Blues we recognised we could wrack up more carries – which is a step in the right direction. We forced their pack to make a number of tackles and dominated possession and territory.

Sharks coach Robert du Preez has opted to stick with his namesake son at flyhalf while Curwin Bosch and Aphelele Fassi swap places at fullback for ...
Sport
3 years ago

“We created loads of opportunities; however‚ we also had 20 turnovers‚ which is not good when it comes to execution.

“What’s important for this week is that we need to find the balance between our game against the Hurricanes and our performance against the Blues.

“The tempo of the games has been of a high nature‚ which has been great for our players to get used to. We are expecting another physical battle‚ but we have to keep in mind it’s a different team and different challenge.”