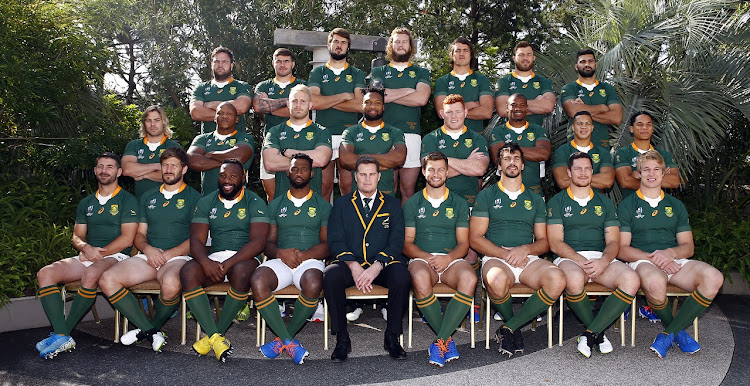 The Springbok squad pose for their team photograph at the Hilton Hotel in Tokyo, Japan on Friday before Saturday's 2019 Rugby World Cup final against England.
Image: Steve Haag/Gallo Images

So, the Rugby World Cup reaches a crescendo on Saturday when England and SA face off in the final in Yokohama.

However, there are various world cups so the tournament itself needs to be defined.

Here is a dummy’s guide to the Rugby World Cup:

What is the Rugby World Cup?

The Rugby World Cup is a 20-team rugby union tournament that takes place every four years on an odd year.

How many teams have won the Rugby World Cup?

How did England and SA reach the final?

England topped Pool C ahead of France, Argentina, Tonga and the US, from where they defeated Australia (40-16) and New Zealand (19-7) in the respective quarterfinals and semifinals. This is their first final appearance since losing the 2007 final to SA, 15-6.

SA finished second in Pool A behind New Zealand, but proceeded to beat Japan (28-3) and Wales (19-16) in the quarter and semifinals to reach the showpiece game.

Where will the final be played?

The Yokohama ground, where SA began their World Cup campaign with a pool stage loss to the All Blacks, hosted the 2002 Fifa World Cup final between Brazil and Germany. The first ground to host the two finals was Paris’s Stade de France in St Denis, with the arena hosting the 1998 Fifa World Cup and the 2007 Rugby World Cup finals.

Who are the captains?

Siyamthanda Kolisi will be captaining SA from the loose-forward position while Owen Farrell will be leading England wearing the No 12 jersey. Kolisi will be taking part in his 50th Test while Saturday’s final will be Farrell’s 83rd appearance for England.

Who will be the referee?

Frenchman Jérôme Garcès will be officiating the final. The 46-year-old has never been a popular appointment with South Africans, as the Springboks haven’t always done well with him in charge. They’ve won only five of their 15 Tests with Garces officiating, but crucially, the last one was the semifinal win against Wales.

England too have stuck to their guns and have named an unchanged squad for Saturday’s Rugby World Cup final against South Africa in Yokohama.
Sport
2 years ago

Herschel Jantjies treated a question about his World Rugby’s breakthrough player of the year nomination like he does the opposition on Wednesday.
Sport
2 years ago

Japan had an emperor enthroned last week but the occasion of Siya Kolisi leading the Springboks in his 50th Test in tomorrow’s Rugby World Cup final ...
Sport
2 years ago