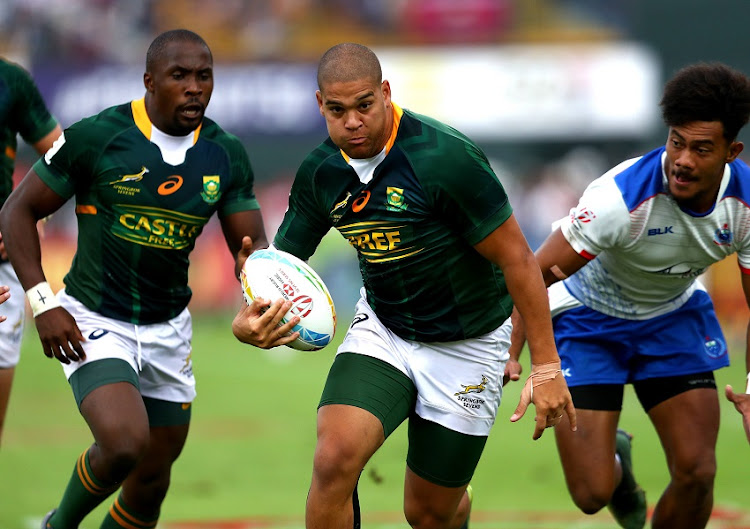 Zain Davids of South Africa breaks away with the ball during the Men's Cup Semi Final match between South Africa and Samoa on Day Three of the HSBC World Rugby Sevens Series - Dubai at The Sevens Stadium on December 07, 2019 in Dubai, United Arab Emirates.
Image: Francois Nel/Getty Images

Invoking the spirit of the Rugby World Cup winning Springboks, the Blitzbokke powered their way to World Sevens Series title in Dubai on Saturday.

They convincingly beat old foe New Zealand 15-0 in a tense final and only put the issue beyond doubt in the last minute when Seabelo Senatla ran clear to score.

The Blitzbokke had dominated the final in territory and possession but the New Zealanders deserve kudos for the way they stayed in the game. The Blitzbokke were denied on at two occasions with the tryline seemingly at their mercy but the Kiwi defence was stout.

The South Africans had sway in the first half but had nothing to show for it until the last move of the half. It was only after sustained pressure that the Blitzbokke found a way through. They had laid siege to the New Zealand tryline and after they were awarded a penalty the ball was whipped wide where captain Siviwe Soyizwapi rounded off unopposed.

It all meant South Africa held a slender 5-0 lead at the break.

The initial part of the second followed the same pattern. The Blitzbokke were in the ascendancy but somehow the New Zealand defence held firm. Eventually however, the pressure told and Chris Dry was at the end of an overlap to score.

“I’m proud. We wanted to play as a team,” said captain Soyizwapi who was also proud of the fact that they kept New Zealand scoreless for the first time in 19 years in this final.

The win will be a huge confidence booster ahead of the Cape Town leg of the tournament starting on Friday. “We will be very keen to play at home,” said Soyizwapi.

Earlier South Africa surged into the final of the Dubai leg after beating Samoa 38-7 in their semi-final thanks largely to a thunderous performance from forward Ryan Oosthuizen. He proved instrumental in attack and defence. He seemed to pop up everywhere and made telling interventions.

The tournament started in inglorious fashion for Oosthuizen however. On Thursday he forgot his jersey at the team hotel but soon made up for it as he was the first Blitzbok to record points in this season’s World Sevens Series when he went over for a try against Kenya.

He, and the team have steadily improved since.

Notable absentees from the semi-finals were defending World Sevens Series champions Fiji who lost to Argentina during the pool stages of the tournament. Fiji beat Canada 40-9 in the ninth place play-off. England won the bronze final 17-14 against Samoa, while in the women’s final New Zealand beat Canada 17-14.